Manila Bay is crucial site for biodiversity and home to over 23 million people, but their wellbeing is at risk due to reclamation projects, which are part of a large-scale top-down masterplan for the bay. It is estimated that more than 11 million people are threatened with displacement due to land reclamations and related disaster risks. As an alternative, Kalikasan is developing a People's Plan.

"If we truly want democracy in environmental governance, we have to empower communities to be able to participate in a fair, level playing field with business and government." – Leon Dulce, Kalikasan

Kalikasan recently completed a study of five communities along Manila Bay assessing the reclamation projects in terms of human rights compliance and their impact on women. They found that projects show no regard for human rights, much less consider local communities' needs, concerns and existing initiatives. Besides that, prioritizing reclamation as a major development initiative also marks a departure from the existing local economies of fisher folks and urban poor communities.

In this context for restricted space for communities to take part in consultations and decision-making, Kalikasan initiated the People's Plan for Manila Bay, to claim the space for meaningful participation. It demonstrates an inspiring alternative to top-down decision-making processes.

The People's Plan for Manila Bay

Both ENDS supports Kalikasan's visionary People's Plan, a participatory environmental governance initiative that aims to empower communities along the bay to play a meaningful role in the management of their ecosystem.

"We work with Both ENDS because a Negotiated Approach enables communities to effectively influence stakeholders who are working in the local areas." – Leon Dulce, Kalikasan

Through citizen science, communities, civil society, and scientists engage in a community-based planning process. They aim to showcase viable land and water uses in coastal areas that support local communities' livelihoods and ensure a healthy ecosystem. Essentially, Kalikasan strengthens communities' ability to negotiate and assert their rights to water and other resources that directly support their livelihoods.

The People's Plan is currently in its development stage and will soon be initiated.

The Manila Bay master plan (known as the Manila Bay Sustainable Development Master Plan, MBSDMP) is being developed with help from Dutch engineers. Both ENDS is engaged in ongoing dialogues with governmental and private stakeholders in the Netherlands to address grievances by Kalikasan and its constituency. In addition to our advocacy for a safe space for communities to meaningfully participate in the master planning processes, Both ENDS supports Kalikasan's visionary response to develop a plan that is for the people and by the people, which is supported by the framework of a Negotiated Approach. 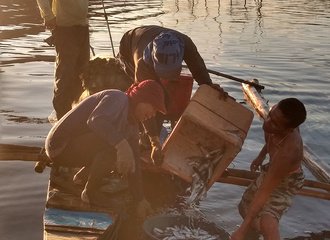