Over the past 15 years the production of palm oil has increased enormously, and not without reason: palm oil, pressed from the fruit of the oil palm, is cheap and is used in many different products. It is processed in ice cream, chocolate, margarine and sauces, but also in personal care products and cosmetics such as lipstick, detergent, toothpaste, soap and biofuel. Unfortunately, the large demand for palm oil has quite some negative side effects: large-scale deforestation, pollution, 'land grabbing' and above all human rights violations are common practice in countries where palm oil is produced.

The delegation on the 'Maasvlakte' near Rotterdam, where the palm oil enters Europe to be processed.

On Friday the 29th of April, an international delegation of four local leaders from Indonesia, Colombia and Liberia visited the Ministry of Foreign Affairs in The Hague to discuss the consequences of the large scale palm oil industry in their region.The meeting was part of a European tour, organised by the 'Forest Peoples Programme' (FPP). Both ENDS organised the Dutch part of the tour in collaboration with Oxfam Novib, SOMO and TNI. In The Hague, the delegation spoke with policy makers, industry, financiers and NGOs about concrete measures and actions to be taken and supported by the Netherlands to improve the situation in the producing regions.

Palm oil mark
These days, around 40 % of all palm oil entering Europe comes from Indonesia. "In Indonesia, an area of 6 million hectares, which is almost twice the Netherlands, is already converted into palm oil plantations. And this area will only increase in the coming years. The Indonesian government wants to double the current production of 40 million tons to 80 million tons by 2020", says Sanderijn van Beek of Both ENDS. This rapid expansion of oil palm plantations has a huge impact on the communities and their environment. The forest, which millions of people directly depend upon for their livelihood, turn into endless monocultures of oil palm. The rich biodiversity disappears and surface and groundwater get contaminated by pesticides and fertilisers, which completely deplete the soil. As palm oil is so profitable, its production is expanding to Latin America and Africa. In countries such as Colombia and Liberia forested area's and other land is rapidly transformed into palm oil plantations.

Natural supermarket
One of the members of the delegation is Agus Sutomo, director of the NGO LINKAR Borneo from Indonesia: "The forest is our natural supermarket; it has been providing us with food and medicines for centuries. When the large-scale palm oil plantations came, the forest disappeared and people no longer have access to food. In addition, water sources are contaminated. We now eat 'instant noodles' and we earn too little on the plantation to let our children go to school." Palm oil production also comes with a lot of violence: too often, people are under great pressure to give up their land. Willian Aljure from Colombia, another delegation member, describes how nine of his relatives, including his mother, were brutally killed. Palm oil companies are not afraid of using brutal violence against those who protest against the conversion of their forest into a plantation. This often happens even with the support of local authorities, according to the testimonies.

Role of the Netherlands
The Netherlands is the largest importer of palm oil in Europe and the country wants to promote sustainable production and supply chains. In December 2015 the Dutch government took the initiative which led to the signing of the 'Amsterdam Declaration', in which the Netherlands and four other EU Member States declare to commit to a 100% sustainable palm oil production, in order to stop deforestation, pollution and human rights violations. The delegation of local leaders asked the Netherlands to make every effort to ensure that this declaration is not just a so-called paper tiger, but will result in binding legal measures.

Legal framework rather than non-binding promises
There are several initiatives to make the palm oil chain more sustainable, such as the Roundtable on Sustainable Palm Oil, in which companies that are part of the palm oil supply chain, financial institutions and civil society organisations have united. Within this initiative, companies have to follow social and environmental rules, but participation remains voluntary and compliance to the rules is, in practice, difficult to enforce. All members of the delegation that came to Europe stressed that these voluntary initiatives lead to very few concrete improvements and that the rights of local communities are still not protected sufficiently. Agus Sutomo: "We need the global community to understand that when they are consuming palm oil and biofuels they are consuming the blood of our peoples in Indonesia, Liberia, Colombia and Peru." The delegation members, who feel the impact of the palm oil production in their daily lives, emphasise that governments should set strict requirements for palm oil entering the EU in order to better protect the rights of indigenous communities and the forests on which they depend.

Palm oil a biofuel?
The meeting was well attended. The intense testimonies of the members of the delegation showed how abuses and human rights violations continue in producing countries, despite certification and initiatives from the palm oil sector itself. Although well-intentioned and positive, these initiatives prove not to be sufficient to protect the rights of people and ecosystems. The visit comes at an important moment, as the Dutch government reviews the European energy policy. In order to meet European standards for renewable energy, palm oil is increasingly used as biofuel to partially replace fossil fuels. A larger demand for palm oil would only increase the problems around its production. We hope that the facts and arguments that have been brought to the table by the delegation, will be taken into account by policy-makers the discussions concerning palm oil.

About the members of the delegation (from FPP website): 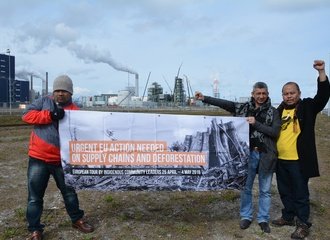