Fat broiler chicken, made possible by The Netherlands

Why is Dutch public money used to sponsor the world’s largest chicken factory farm in Ukraine , when we don’t even accept the production of broiler chicken on our own soil? That was the central parliamentary question raised by the Party for the Animals (Partij voor de Dieren) in August 2012, just after Both ENDS and its Ukrainian partner NECU published the report Dutch money, strange meat. Now, three years later, the factory farms of Myronivsky Hliboproduct(MHP) keep expanding. And the massive slaughtering of more than 300 million chickens a year is still made possible by the Dutch tax payer through multilateral financial institutions and Dutch export credits.

Following the continuous complaints and concerns of local inhabitants in the area, an international team investigated the social and environmental impacts of the mega broiler chicken factory in May this year. The report Black Earth – written by Bankwatch, NECU, Both ENDS, Estonian Green Movement, Latvian Green Movement and SOMO – concludes that the scale and method by which the chickens are bred and slaughtered present unacceptable risks for public health, such as the pollution of soil, water and air, and manure stench and noise.

Instead of taking time for reflection to tackle the social and environmental problems, the factory does precisely the opposite as it seeks to expand its capacity and increase export production. Already now, the factory breeds almost 60% of the industrially produced chicken in Ukraine. The expansion is largely supported by European tax money. Moreover, many local inhabitants that were interviewed told the researchers that MHP is attempting to persuade them through intimidation to lease their land to the company, in spite of their resistance to the expansion of the factory farms.

Meanwhile, the report urges that the Ukrainian agricultural sector should become sustainable. Decision-making processes at both the local and national levels should be more transparent and democratic, because only transparent dialogues between the government, the MHP, the local inhabitants and civil society organisations can actually promote sustainable and fair solutions for the current problems. The report also concludes that European money should in fact be spent to support small farmers and small and medium enterprises (SME) in getting access to land and modern technologies, so that they can contribute to a sustainable and healthy development of the economy.

On October 14 the East European Bank EBRD intends to decide on a new loan of 85 million Euros for financing the production and processing of chicken food. It is therefore time to reflect on whether there are valid arguments to support this company with even more public money. 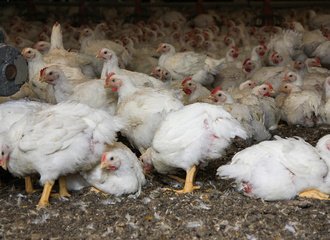