The closing of the Barro Blanco dam last year caused not only material but also cultural damage in the affected Ngäbe-Buglé communities in Panama. So far, funder FMO is not taking responsibility for the human rights abuses caused by the project. So, what now?

The indigenous Ngäbe-Buglé have been opposing the dam for years, without success. The test floodings in May 2016 raised the water level of the reservoir to 103 meter, inundating large pieces of indigenous land. Both ENDS' colleague Anna van Ojik visited the community Kiad in March to seek a solution for this long-lasting conflict.

Material and immaterial damage
Some houses, cacao plantations and vegetable gardens have been destroyed by the water, part of the Ngäbe's food forests has died. The river bank is hardly accessible through the mud and the water is no longer suitable for consumption or doing laundry. The inhabitants now have to rely on a thin water trickle from a provisional tube.

At least as bad is the intangible damage, especially around Kiad, the cultural center of the Ngäbe. Here is the only school where the written version of the Ngäbe-language is taught. Because trails between the communities are no longer passable, many children now can not go to this school. In addition, a cemetery flooded and ancient rock drawings of the ancestors of the Ngäbe-Buglé are now under water.

Consultation proved difficult
The communities, united in the 'Movimiento 10 de abril' (M10), meanwhile seek ways to influence the project, that affects their life so directly. M10 has therefore made a counter-proposal to the Panamanian government, which is based on a water level of 80 meters. At this level, no land within their indigenous territory, the comarca, will be inundated. Their proposal is now being discussed.

Apart from that, the dialogue between the indigenous Ngäbe and the government is difficult. The government is trying to reach an agreement with the indigenous Ngäbe-Buglé Congress and negotiates it with its board, which however was fired by the same congress this March because of disagreements over mining concessions. Therefore, there is little chance that the congress will support the agreement, which may be presented this week already.

All national legal paths to stop the dam have been exhausted. The communities have now pinned their hopes on the Inter-American Commission on Human Rights (IACHR). With the support of Both ENDS, representatives of M10 and partner organization ACD traveled to Washington for a hearing on human rights in Panama. The outcome is at least a small step forward: the government should better consult the communities and must submit proof of the consultation process to the IACHR. Today, April 4 is the first meeting, where M10 will be present.

FMO should not accept human rights abuses
Even though Both ENDs has been involved for years in the Barro Blanco case and stays in close contact with our local partners M10 and ACD, it turns out that there are many things you won't learn from a distance. The Dutch development bank FMO, who has not visited the area recently, therefore has no clear view on the situation on the ground. Both ENDS has already informed FMO about the latest developments in Panama.

FMO now has to show that they do not accept the human rights abuses by their client GENISA, the company building the dam. Furthermore, FMO can no longer point to the dialogue between the government and the communities, now that it is very clear how arduous this process has been until now. FMO should visit the affected communities and recognize the human rights abuses that take place there. And FMO should ask their client GENISA to halt the project until a consultation process has been carried out correctly and the affected communities received fair compensation. 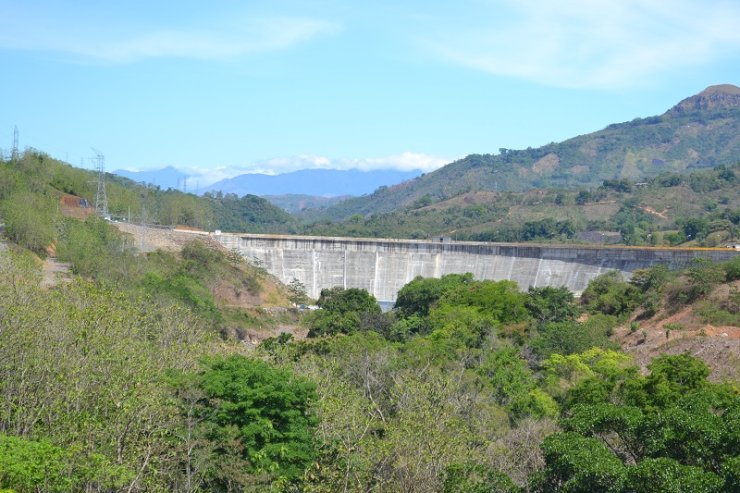 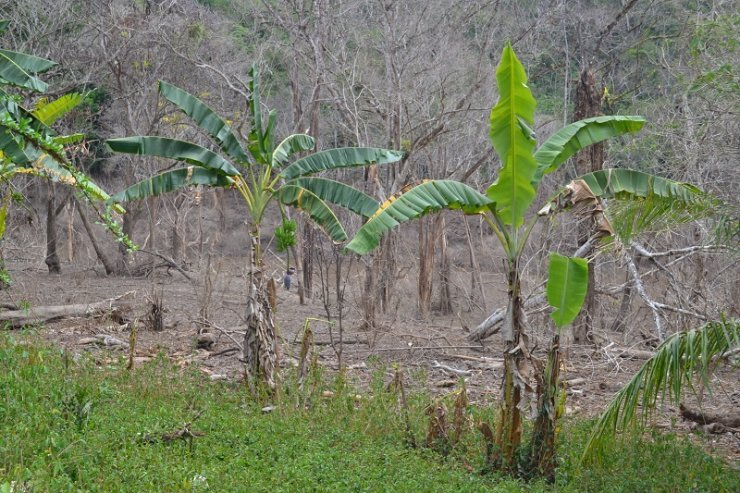 The dead trees clearly show until where the water rised. Although the water level has dropped somewhat, the damage is huge. According to the plan of the dam, the water can reach even higher. 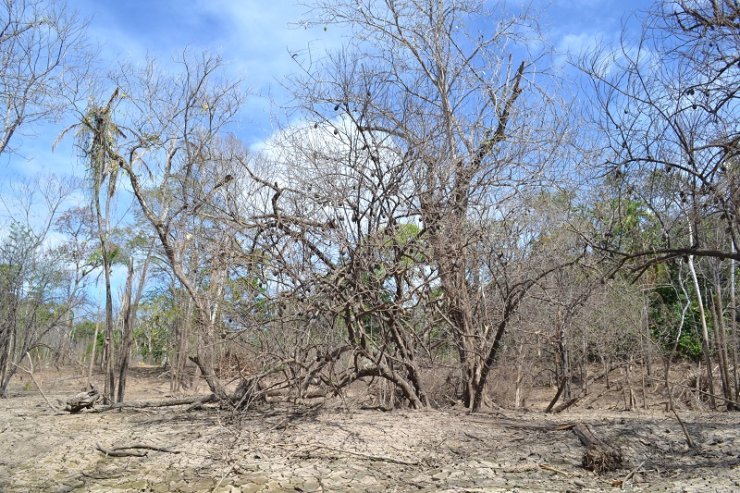 The cocoa plantations of Kiad's inhabitants have been destroyed by the water. The fruits are left in the trees. 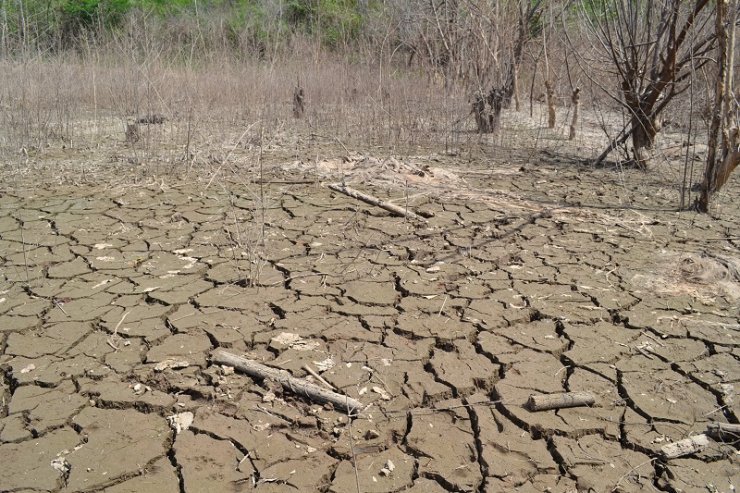 These are the remains of a house engulfed by the water. There remain only a few poles. 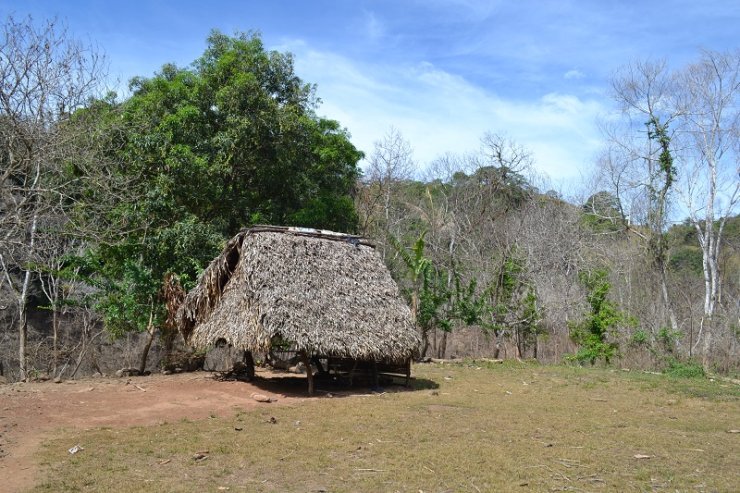 The water came until this house, causing the owners to abandon it. 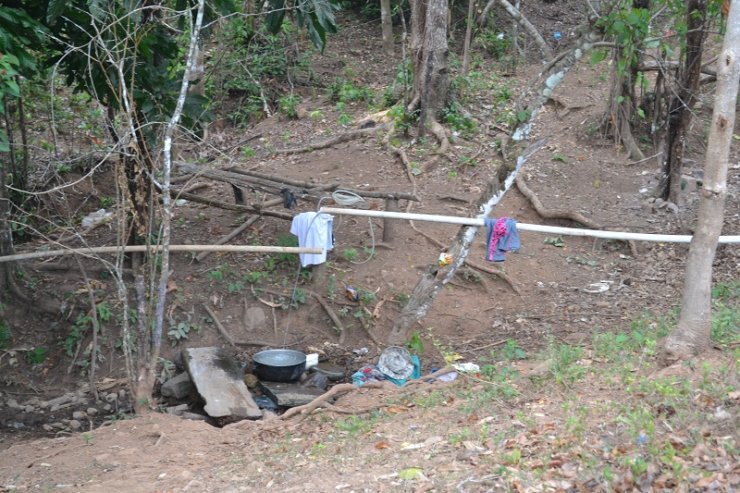 This temporarily laid tube is the only drinking water supply for the residents of Kiad. Previously, they used the water of the river, but that has become unusable by the closing of the dam. 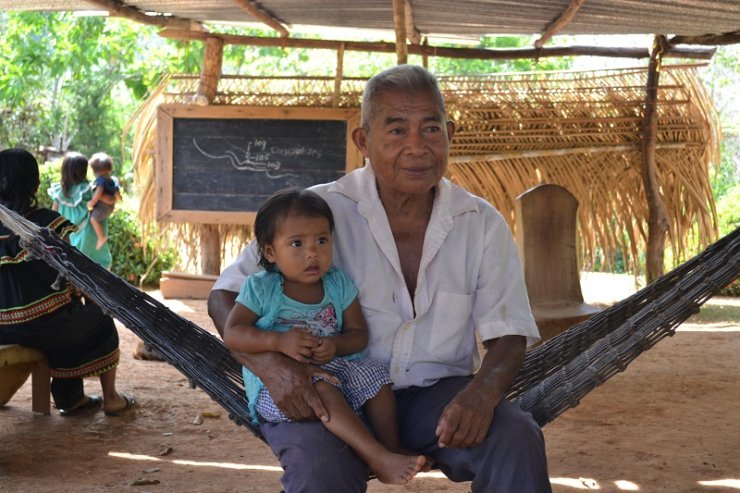 Manolo with his youngest grandchild. 50 years ago, the illiterate Manolo invented the script of the Ngäbe language and founded this school in Kiad. It is the only school where the script is taught. Children from other communities can't reach the school any more because of the floods. 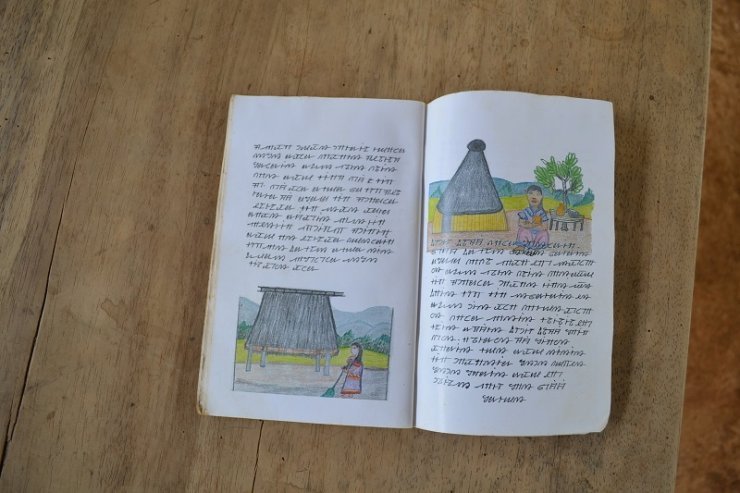 Schoolbook made by Manolo in the Ngäbe-script. 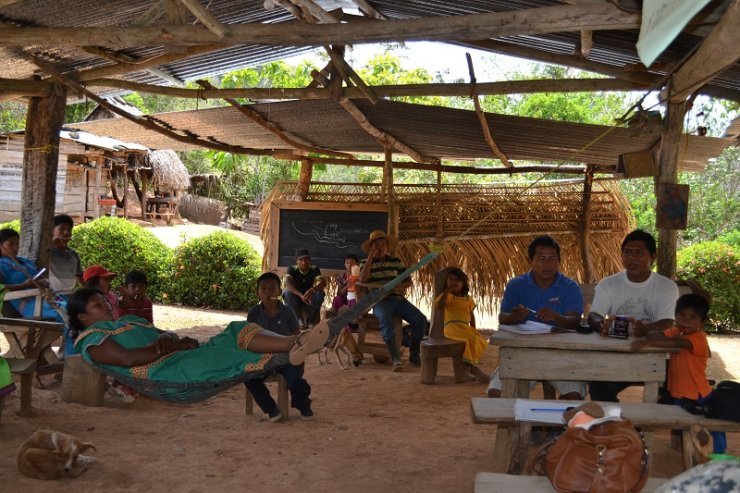 The school is also being used as a meeting room. Whoever wants to share their thoughts, often does so from the hammock. 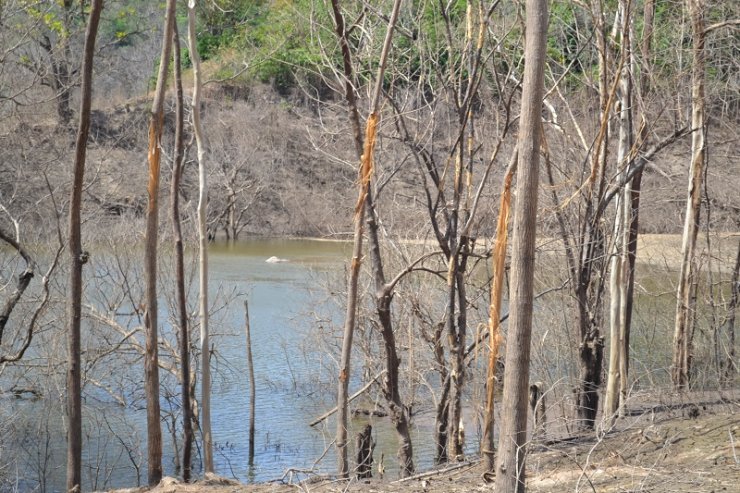 Only the top of the rock that carries (or carried) the ancient rock drawings of the ancestors of the Ngäbe is now visible.