Both ENDS and SOMO welcome the announcement done today by the Dutch and Finnish development banks, FMO and FinnFund, to exit the controversial Agua Zarca hydroelectric project in Honduras. Conflict about the project has led to violence in the region, including the murder of three leaders who opposed the project. In March 2016, renowned human rights defender Berta Caceres was murdered for opposing this project in indigenous Lenca territory.

The banks’ announcement comes over a year after they had committed to a “responsible exit” in May 2016 and fails to acknowledge the role they and their client played in causing the conflict in the region.The third funder, the Central American Bank for Economic Integration (CABEI), remains invested in the project.

“What happens now should first and foremost address the impunity for the human rights violations in the region. Violence and threats are greater than ever and still no justice has been done for the brutal murder of Berta Caceres, the violent attacks in the community and the damages done to the communities' property. The situation for the communities around the Agua Zarca project remains precarious as long as this is not addressed”, said Anna van Ojik, policy advisor at Both ENDS.

“While we are relieved that FMO and FinnFund have finally ended the relationship with their client, DESA, CABEI’s continued financing means the project is still on life support,” said Kris Genovese, senior researcher at SOMO.

“Attacks on human rights defenders protesting development projects must end. While the damage is already done for the communities around the Agua Zarca project we expect that FMO will strengthen its human rights policy considerably to avoid similar disastrous outcomes in future projects”, said Danielle Hirsch of Both ENDS. 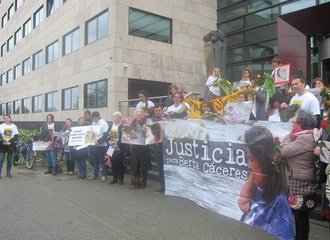