Trade is War: lecture and interview with Yash Tandon

The currently negotiated Transatlantic Trade and Investment Partnership between the US and the EU (TTIP) is higly controversial and has ignited the public debate about the costs and benefits of globalisation to society at large. In the Netherlands, concerns are raised on transparency, the growing power of big companies and the consequences for the environment. But how should we view TTIP in the bigger picture around global free trade, the relation between the North and the South and the geopolitical dynamics behind free trade agreements? Yash Tandon addresses this and related subjects in his new book 'Trade is War – The West’s War Against the World', which he will present on the 3rd of June in Amsterdam.

Tandon is an Ugandian scholar with decades of on-the-ground experience as a high level negotiator at for example the World Trade Organization (WTO). From land and water to health and human rights, according to Tandon everything is intimately linked to the issue of free trade. Trade and investment  agreements should be seen as a servant of the global business of multinational corporations. Tandon argues that, for the vast majority of people, and especially those in the poorer regions of the world, free trade not only hinders development – it visits relentless waves of violence and impoverishment on their lives.

After the book presentation Natasja van den Berg will moderate a lively discussion with the public. What does Tandon’s experience mean for the TTIP debate? Come and participate in a conversation with Yash Tandon! 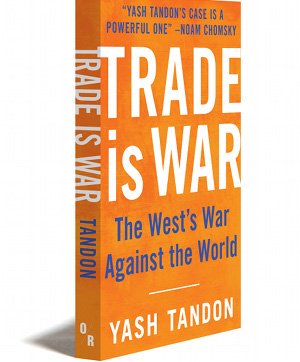