The palm oil dream: too good to be true

In 2005, a palm oil company approached the villagers of Kiungkang in West-Kalimantan, Indonesia, with offers to convert their farms to oil palm smallholdings. Many farmers agreed to the proposal because of the high monthly incomes promised by the company that they could earn from the oil palms. Unfortunately, the palm oil dream turned out to be an illusion.

In Kiungkang, the smallholder arrangement meant that the palm oil company whose concession surrounds the village, PT SML, planted oil palms on 100% of the land of farmers. The company incorporated 80% of this land into its own plantation, and the remaining 20% was left to be managed and harvested by the smallholders. The company would then buy the palm kernel harvested by the farmers on their 20% of the land. Depending on the size of their smallholding, farmers were told they could earn as much as 9 million Rupiah (± € 600) a month, almost twice the average income in Indonesia. A very promising prospect!

Smallholder incomes: not enough to live on

But when Both ENDS staff Roos Nijpels and Michael Rice visited the village with our partner organisation Link-AR Borneo, the smallholders told them a very different story. The farmers were obliged to sell their palm kernel to PT SML at rates determined by the company. Smallholders were also required to enter into unnecessary credit arrangements at high interest rates with PT SML to finance the planting of oil palms on their land. Smallholders were also obliged to buy fertilizer and pesticide from the company, pay for transport of their palm kernel to the processing mill, as well as a monthly “management fee”.

The company deducts these ‘costs’ from the farmers’ income. In the end, most smallholders receive only a fraction - often no more than 10% - of what they were initially promised, falling far below the average national income and even below the poverty line. The impact on their livelihoods is dramatic. Some farmers have been forced to find work labouring on the company’s plantation because their smallholding does not provide enough income to feed their families and they can no longer grow enough food because their farm has been replaced by the oil palms.

But the impacts are not only financial. The villagers showed Roos and Michael the empty plots of land that used to be rice paddies. They have been abandoned since the watershed dried out and the land became too contaminated from pesticide and fertilizer run-off to grow food. In one part of Kiungkang, the water is no longer safe to drink or use for washing.

Farmer and village-council representative Abang explains in this short video the consequences of palm oil in his village:

While there is disagreement within the village about what has to be done, the shared attitude is that the arrival of the palm oil company turned the lives of the villagers upside down. Nevertheless, many villagers are afraid to protest against the company because they now depend on working on the palm oil plantation and can’t afford to lose their jobs. The government doesn’t help them; the letters that informed their representatives of the problems caused by the oil palm plantation have been ignored for years.

Both ENDS and Link-AR Borneo are now looking into the options offered by the RSPO’s Complaints System. Although PT SML is not a member of the RSPO (Round Table on Sustainable Palm Oil), it is understood that they supply to RSPO-member Wilmar International, the world’s largest palm oil producer and a major supplier of companies like Unilever. Verifying that supply-chain link is not always easy, which is why it is important that local organisations like Link-AR Borneo support communities to investigate the options available for raising their concerns.

In Kiungkang, Link-AR Borneo is also helping smallholders understand and review their agreements with PT SML to see whether there are any possibilities to renegotiate or terminate the arrangements. Many smallholders are kept in the dark about the formal nature of their relationship with the company and what their options are.

At the same time, it is important to offer alternative livelihoods that decrease the community’s dependence on palm oil. Therefore, a key focus of Link-AR Borneo’s work, supported by Both ENDS, is strengthening the economic resilience of rural communities by promoting trade in non-timber forest products (NTFPs) and social-forestry practices.

We do this through the NTFP-Exchange Program and our Rich Forests initiative, which emphasise the need for community capacity-building and empowerment, especially for women, to bolster the role of alternative, sustainable livelihoods for rural and forest-dwelling communities. At the same time, Both ENDS works with local organisations to ensure that forest areas from which NTFPs are derived are protected, conserved, and managed in a sustainable way.

The problems around palm oil in pictures 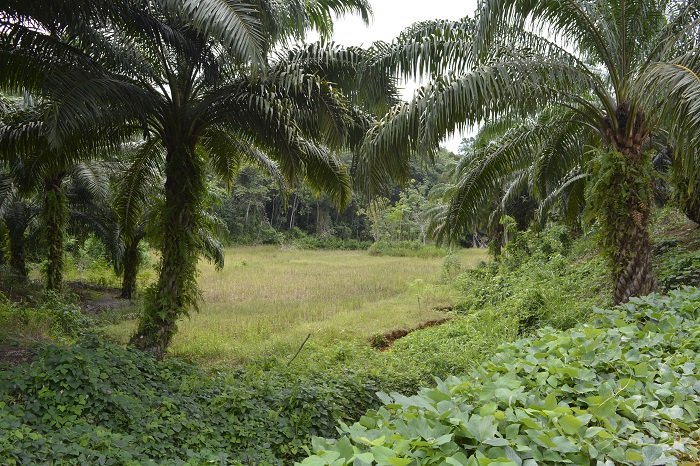 Abandoned rice paddy in between the oil palms 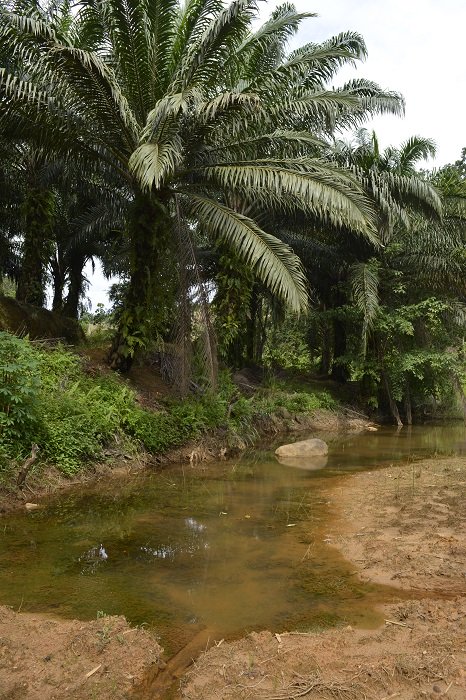 Chemicals from the plantation have polluted the water 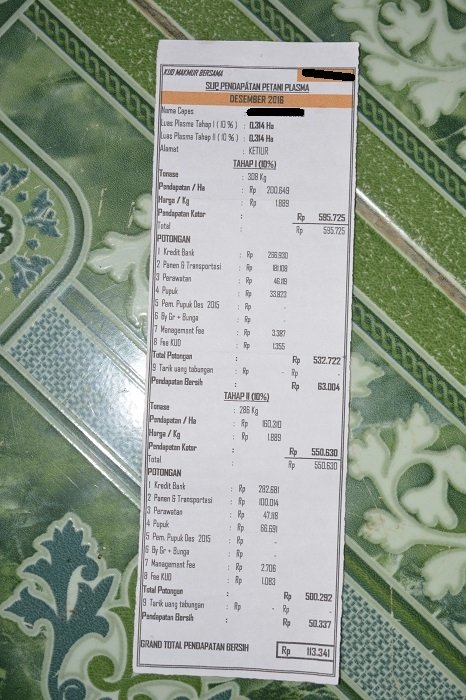 The bill from a palmoil smallholding. Of the gross income (pendapatan kotor) of more than 1,1 million rupiah the farmer should get in two parts, only a net income (pendapatan bersih) of 113 thousand rupiah (about € 7,50) remains after all costs have been deducted

The solution in pictures: NTFPs 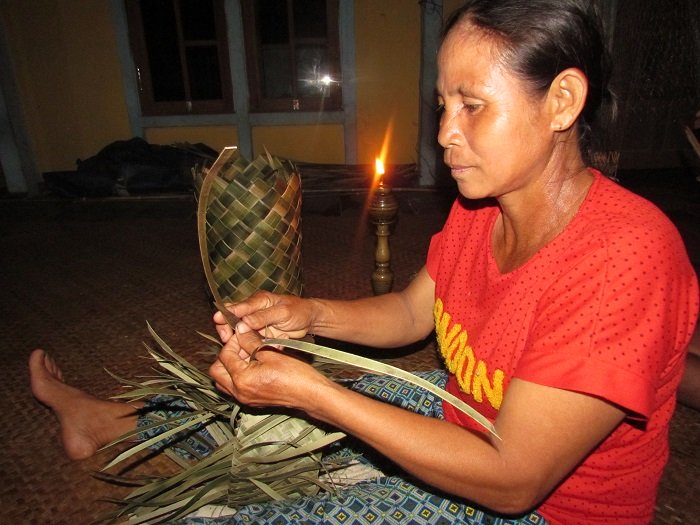 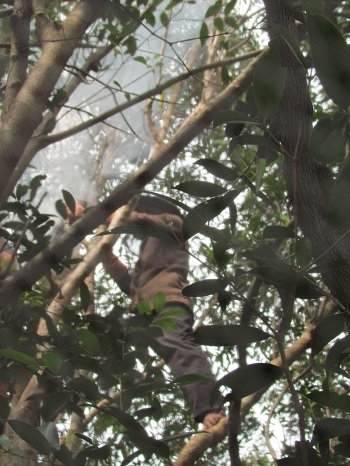 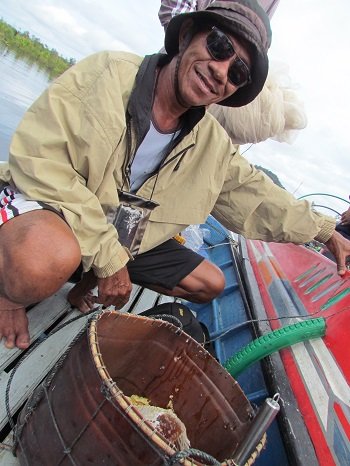 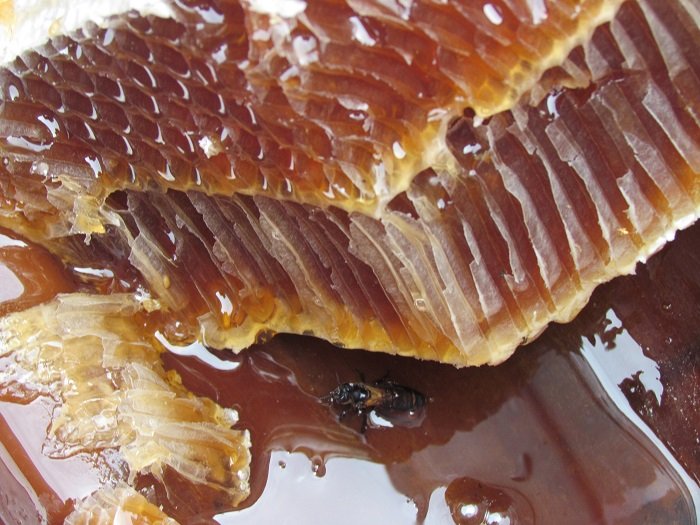