Last week, indigenous leaders from various countries were in Paris to urge action on deforestation and human rights abuses at the  multi-stakeholder meeting of the Amsterdam Declarations Partnership. The group, invited by Forests Peoples Programme and Both ENDS, presented a publication 'Supply chain solutions for people and forests' containing a set of practical recommendations from local communities on how to make supply chains more sustainable and fair.

Together with our partner Forest Peoples Programme (FPP) we issued a press release (also see below) on June 28th.  After the events in Paris, the delegates went to Brussels to present a petition signed by 157 000 people urging European Commission President Jean-Claude Juncker to uphold the European Union’s international commitment to halt deforestation by 2020 by supporting an EU Action Plan to protect forests and respect forest peoples’ rights. 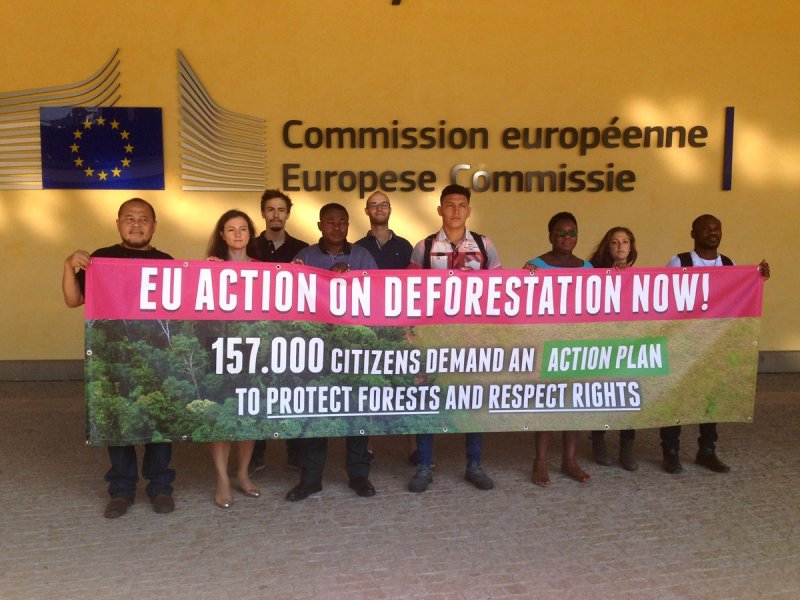 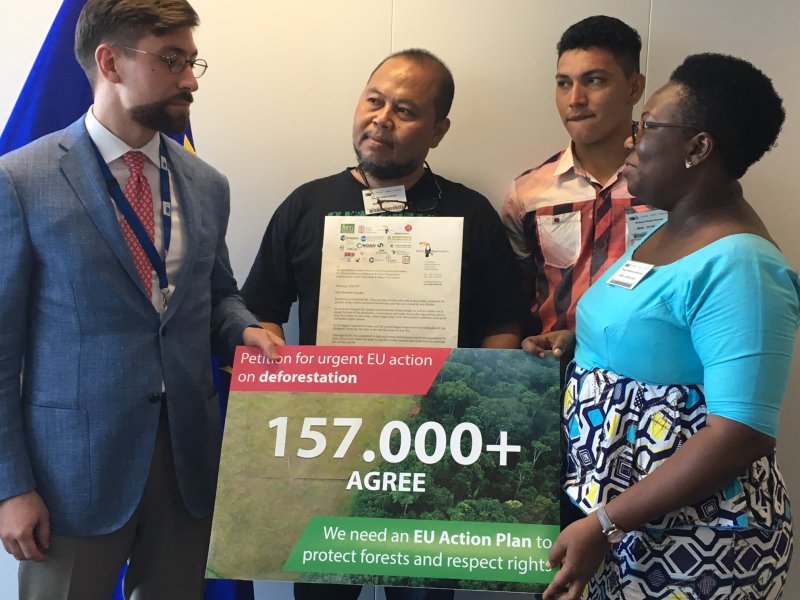 Indigenous leaders and human rights defenders from four tropical forest countries are travelling to Paris to urge action on deforestation and human rights abuses at the 27 June multistakeholdermeeting of the Amsterdam Declarations Partnership, 'Towards deforestation-free sustainable commodities: focus on key drivers'.

Six European Union member states and Norway have pledged to work with companies to eliminate deforestation from their agriculturalcommodity supply chains by 2020. As the deforestation-free trade target date gets ever closer, European countries continue to import palm oil and other agri-commodities causing negative impacts on forests and forest peoples. Indigenous and forest community representatives are in Paris urging immediate action.

Among the delegates coming to Paris is a human rights defender Ramón Bedoya from Colombia whose father was killed defending his community's ancestral lands in the Mi Terrabiodiversity zone.

Franky Samperante from Indonesia, where communities are suffering land conflicts, violence and intimidation at the hands of oil palm, pulp, paper and logging companies explains:"Logging and plantation companies in Indonesia continue to demolish, evict, and destroy our forests and agro-forests. Communities have lost and are still losing their livelihoods. They now have difficulties in finding decent sources of food. Their indigenous knowledge is threatened and they are suffering malnutrition and health problems. Action has to betaken to stop rights violations and forest clearance."

Jean-Marie Nkanda from Democratic Republic of the Congo, Wilhemina Beyan from Liberia, James Otto from Liberia, Franky Samperante from Indonesia and Ramón Bedoya from Colombia. See short biographies below.

Indigenous and forest communities around the world are losing their lives, land and livelihoods to world trade in agricultural products and other conflict commodities. Next week, indigenous peoples and community representatives will travel to Paris to set out the essential measures needed to reform global supply chains, ensuring respect for their lands, forests and human rights.

Their message comes during the French presidency of the Amsterdam Declarations, when the signatory countries will discuss progress made towards combatting deforestation. The Declarations, signed in 2015, commit the signatories to remove agricultural products driving deforestation from supply chains. The signatory countries are the United Kingdom, France, Denmark, Norway, Germany, the Netherlands, and Italy.

Europe is a major importer of deforestation commodities, often contained in products such as shampoo, cereals, pet food, and chocolate, with 27 EU member states importing 10% of global deforestation between 1990 and 2008 alone. Existing safeguards and frameworks have been insufficient to protect indigenous and forest communities which are taking back control of their territories and resisting encroachment of companies clearing and grabbing land for commodities.

To interview the delegates please contact the individuals listed above.

Jean-Marie Nkanda is a Forest Governance Program Officer whose work focuses on the development of participatory community forestry approaches to address the drivers of deforestation, as well as the development of community monitoring and control systems for the promotion and defence of community rights. He is currently acting coordinator of Réseau Ressources Naturelles, an advocacy organization that supports the rights and interests of local communities and indigenous peoples in the management of natural resources.

Wilhemina Boahemaa Owusu Beyan is a Programs Director at the Social Entrepreneurs for Sustainable Development (SESDev) in Liberia, with 13 years' experience working in the NGO sector. A strong focus of her work has been on natural resource management  and governance, and in particular building capacities of forest fringed communities and other local communities to enable them protect and secure their rights in concessions (mining, logging and agribusiness). Currently she has been designing and initiating programs that support development models which promote social, economic and environmental justice particularly for those most marginalised from, at the same time directly impacted by, current development processes such as logging, monoculture plantations and mining extractions.

James coordinates the Community Rights and Corporate Governance Program at Sustainable Development Institute (SDI), which aims to create space for the participation of local communities in decision making processes on natural resources. He has worked for over ten years on natural resource management and governance in Liberia, and has partnered with communities across the country in forestry, land tenure and corporate issues. SDI is currently working to document the human rights violations and deforestation activities of oil palm expansion, as well as actively campaigning for the passage of a progressive land rights act.

Mr. Franky Samperante is an indigenous representative from Sulawesi, and is the founder director of the indigenous peoples' organisation Pusaka, which provides support to indigenous communities in Central Kalimantan, Indonesia. In 2014, Pusaka published an atlas detailing extensive palm oil land grabs on indigenous peoples' lands in Papua and West Papua.

Organisation: SEPA (Sabah Environmental Protection Association) President (2013 – present). Lanash has been working on social and environmental issues for the last 17 years. She studied law in the UK and specialises in Environmental and Planning laws and Human Rights. She is currently serving her third term as the President of SEPA. SEPA is a locally based volunteer NGO, working closely with communities/groups/individuals that are affected by unsustainable development. SEPAs' main goal for Sabah is to attain Developmental Justice and to ensure that sustainable developement is achieved as per Malaysia's commitment to International Treaties.

The press conference has been organised by Friends of the Earth France, Forest Peoples Programme, Rainforest Foundation Norway and Fern, in partnership with Pusaka, Sustainable Development Institute and Réseau Ressources Naturelles.