Saying NO! to free trade agreements

Today, on the 2nd of April, activists from Africa and Europe are staging a protest action in front of the European Parliament in Brussels to make the voices of the poor and marginalised citizens heard. Holding banners and chanting slogans to the beat of djembe drums, they asked the African and European governments to prioritise peoples’ rights and interest in their trade deals and particularly, in the EU trade and development policies with Africa. Why do they protest at this particular moment and what is Burghard Ilge of Both ENDS doing there?

On the 2nd and 3rd of April, the EU-Africa summit is taking place in Brussels. To the African Union this would have been a perfect platform to reopen the discussion about EPAs: controversial Economic Partnership Agreements between the EU and African countries or regions. These agreements generally do and have done much more harm than good to the population of many African countries. This is why many civil society groups, including Both ENDS, have been calling upon decision makers for years to stop these practices. 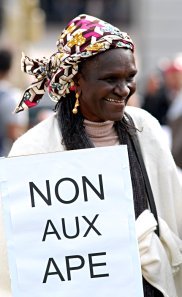 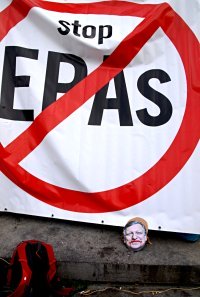 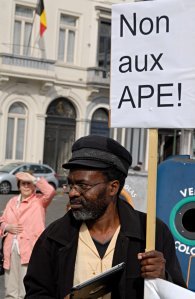 "As expected, the EU did not see the need to put the issue on the agenda for the current summit, but to many African countries the matter is very urgent indeed," says Burghard. "Before October this year, they have to decide whether they want to agree to the EPA’s as they are currently proposed. The EU puts pressure on many countries in Africa to rush into accepting what the EU has put on the table. EPAs, like other EU free trade agreements, are very likely to benefit European trade and commerce, but harm the local population of these African countries."

This is why 50 trade justice campaigners from Europe and Africa gather simultaneously in Brussels for an international seminar titled: 'The EPA that the EU imposes versus the trade policy that Africa needs'. They are joined by African farmers’ representatives and food security and tax justice activists, all trying to convince the European and African decision makers that there are indeed alternatives, and that EPA’s should stop right away.

11 October 2011: Activists on their way to Brussels