The prestigious Goldman Environmental Prize, also known as the Green Nobel Prize, was awarded on Monday, April 28, to six activists from around the world who are committed to a better local environment. One of the winners was Suren Gazaryan, a Russian zoologist and activist. He received the prize for his campaign against illegal exploitation of protected forestland by the Russian government around Sochi. Gazarya works for EWNC, an organization that is supported by our partner organisation Bankwatch.

While conducting field research on bats in the 1990s, Gazaryan came across evidence of illegal logging and construction that was destroying the bats’ habitat. Gazaryan set out to stop this dangerous practice by the Russian government and began collaborating with EWNC (Environmental Watch on North Caucasus), an organization that is campaigning for the protection of the environment in the Western Caucasus under very difficult circumstances. This area on the coast of the Black Sea contains one of the most unique and diverse ecosystems of Europe.

Corruption and environmental devastation in Sochi

Unfortunately, Russian authorities have been carrying out large-scale logging for years now in Western Caucasus in order to make room for private residences of the Russian elite and other prestigious projects. "After the 2014 Winter Olympics were awarded to to Sochi in 2007, large-scale infrastructure development only increased", says Huub Scheele of Both ENDS. Huub has been working for years with civil society organizations in Eastern Europe and Central Asia. “Gazaryan and his colleagues at EWNC labored meticulously for over seven years to document the environmental, legislative and commercial plunder of the protected nature reserves surrounding Sochi. Taking into account how repressive the political environment in Russia can be for activists, his achievements are remarkable.”

"We are pleased that the Goldman Prize provides the important work of Suren Gazaryan and EWNC with worldwide attention. We also hope that the price will support them to continue their work, since the Russian government is currently conducting an active campaign to thwart the activities of EWNC." In the past, several partners of Both ENDS have received price, for example Sobrevivencia from Paraguay, Green Alternative from Georgia, Sakhalin Environmental Watch from the eponymous region in Russia, Ecoton from Indonesia and Friends of Lake Turkana in Kenya. We hope in the future more of our partners will receive such recognition for their courageous work. 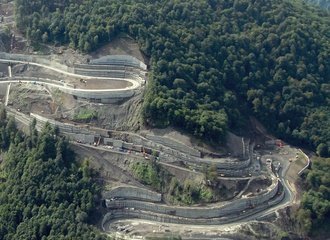