Representatives of the Dutch and the German development banks (FMO and DEG) are in Panama today to discuss the future of the controversial Barro Blanco project with the government. Last May, the locks of the dam were closed to test the dam, in complete breach of all previous agreements. Part of the surrounding land is now flooded and some residents might soon have to be evacuated. Both ENDS, together with seven other organisations sent a letter to the directors of the two banks, urging them to assume their responsibilities as investors in the project.

The letter also calls upon the banks to push the Panamanian government to immediately stop the ‘flood tests’ and to repair the damage already done. In addition, future decisions concerning the project should be based on the voices of all local communities involved. Banks should properly monitor whether rules and agreements are complied with and they should send an independent fact-finding mission to the country.

The letter to FMO and DEG

Report of National Human Rights Coalition of Panama (In Spanish)

More news on this matter on the Both ENDS website:

1 June 2015: FMO did not follow its own rules in financing Barro Blanco dam

6 May 2015: Construction of Barro Blanco dam will be resumed

7 May 2014: Complaint against FMO on grievance mechanism.org

Background information on Barro Blanco can be found here. 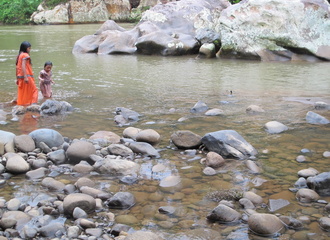