Residents belonging to the indigenous Ngäbe-Bugle people living on the traditional indigenous territory surrounding the Barro Blanco dam in Panama, have filed a complaint against the Dutch development bank FMO. The bank has invested $ 25 million in the dam that is currently under construction in the river Tabasará. The Ngäbe-Bugle blame FMO for not adequately following its own social and environmental standards. FMO also violates international agreements relating to indigenous peoples. For Both ENDS, Anouk Franck is closely following FMO’s activities.

Which standards are at issue?

Anouk Franck : An operation of this size obliges the FMO to ask permission from local residents on the basis of sufficient information . This is called free, prior and informed consent. It is a right that is enshrined in the UN Declaration on the Rights of Indigenous Peoples. Part of the Ngäbe-Bugle people, represented by the environmental and human rights organization M-10, claims this right was violated during the planning and construction of the Barro Blanco dam. This has all sorts of consequences. The reservoir of the dam, which will be used for generating electricity, is part of traditional indigenous territory (‘comarca’, in the native language). This means that homes, schools, and places of religious, cultural and archaeological importance will be inundated when the dam starts to operate. A number of Ngäbe-Bugle is forced to move from the land on which they have been living for generations. The dam will convert the Tabasará River from a running river to a stagnant lake ecosystem, resulting in significant changes to the Ngöbe’s diet and landscape.

So FMO does have standards, but is not complying with them?

Anouk Franck: "Yes, the problem is the implementation of the standards, which is insufficient. The rights of the Ngäbe-Bugle are violated, despite the fact that we have been talking with FMO about this case for years, but now after all the rights of Ngäbe-Bugle violated. A development bank that takes its standards on human rights  seriously should not be involved in this project. And certainly not the FMO, that wants to distinguish itself as a responsible bank with the sale of sustainability bonds."

What is the situation at the moment for the Ngäbe-Bugle?

Anouk Franck: The dam is nearing completion. This means that the forced eviction of the families from their land is getting closer. They have created an encampment on their land in a final attempt to hold back security forces and the employees and machinery of the construction company. The situation is tense and teargas has been used against the protesters. Previous clashes between protesting Ngäbe and Panamanian security forces have resulted in a number of deaths and injuries.. We believe FMO should not be involved in these injustices and call on the bank to withdraw from the project." 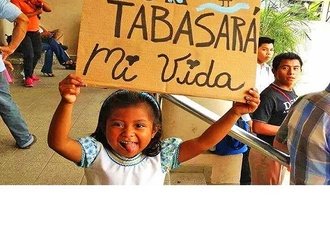