Home
>
What's new
>
News
>
All Eyes on the Amazon: the future of protecting forests in Brazil

All Eyes on the Amazon: the future of protecting forests in Brazil

On Wednesday, November 14, Dutch Newspaper De Volkskrant published a joint op-ed by Both ENDS, Hivos, Greenpeace Netherlands and Witness about the deforestation in the Amazon region which is still going on rapidly, having disastrous consequences for the indigenous people who live in the area, for biodiversity and for the climate. The Netherlands is one of the largest buyers of Brazilian agricultural products such as soy and beef, and should ensure that deforestation, land grabbing and human rights violations do not occur in these production chains. Unfortunately, this is not at all the case yet.

“We are protecting nature,” explained André Karipuna, a young charismatic leader of an Indigenous community in the Brazilian Amazon when he recently visited Amsterdam, after his participation at a UN meeting in Geneva, where he reported about the dramatic situation his people face through deforestation. “But we’re afraid of not being alive tomorrow anymore.” The Karipuna, who are just 58 people, are facing serious threats through illegal deforestation, although their territory is demarcated and protected by Brazilian law.

In light of the changing political situation after the presidential elections, communities such as the Karipuna might be even more concerned about their future. After personally meeting André Karipuna, we share fears that the protection of Indigenous people and the Amazon rainforest is at stake.

The newly elected president, Jair Bolsonaro, stated during his election campaign that his government will stop demarcating new indigenous lands and revise the existing ones. He also declared that he will weaken the surveillance on environmental crimes, loosen up environmental licensing rules, and allow the use of weapons by rural landowners.

If these promises are transformed into public policies, Brazil could face a huge setback in environmental and social achievements. This is especially worrisome considering Brazil is already the deadliest country for environmental and human rights defenders, with alone in 2017 more than 57 environmentalists and Indigenous leaders killed, who tried to protect their homes and communities from mining, agribusiness and other destructive industries.

The Amazon rainforest is not only the habitat of the Karipuna and many other communities. It is a hotspot of biodiversity and has a crucial role for the world’s climate. We cannot afford putting the Amazon rainforest at risk. A recently published IPCC report clearly states that we need forests to limit global warming to 1.5ºC degrees and prevent the worst impacts of climate change.

The new Brazilian government holds the key to either protect the world or take us over a tipping point into the disastrous impacts of a climate breakdown. We call upon the world community to stand with the Indigenous Peoples, who are the guardians of the forest. Where they live, the protection of biodiversity and the forest is more guaranteed.

Fortunately, the Netherlands is not on the sidelines as it is one of the biggest trading partners of Brazil. This is the moment to take responsibility to eradicate deforestation, land grabs and human rights abuses from all supply chains. We call upon the Dutch government, banks and companies to make sure timber or agricultural products, such as soy and beef, reaching the Dutch market contribute under no circumstances to the destruction of the Amazon rainforest.

This is not only complying with the human rights commitments of the Dutch government, but is also in line with our international agreements to climate and deforestation (such as the Paris Agreement and the Amsterdam Declaration towards Eliminating Deforestation from Agricultural Commodity Chains with European Countries).

The Netherlands must make it mandatory for companies to trace their supply chains and ensure that they adhere to human rights laws. Besides addressing forest protection, the Netherlands must reconsider their direct involvement in the soy corridor, an infrastructure project that would transport soy and other commodities through several Indigenous lands.

Until now the Dutch government has always claimed the soy corridor would be a project meeting the highest sustainability standards. However, this has been questioned already in the past, and unless the new president strongly commits to environmental and Indigenous People protection, this mega-infrastructure project will most likely contribute to even more pressure on the fragile Amazon region.

Forest protection is key for Indigenous and local communities, and in return, Indigenous lands have proven to be the best measure against deforestation. Although they face a powerful logging industry, André Karipuna made one thing very clear: “If the Brazilian state does not protect our territory, the invaders can exterminate us to take possession of our territory, which is large and rich. We Karipuna are few, but we are going to resist.” As the organizations working together within the All Eyes on the Amazon program, we are standing with the Karipuna and other Indigenous and local communities, who are the guardians of the Amazon. We call on the Dutch government and companies to make sure that the Amazon is protected no matter who is the future president of Brazil. 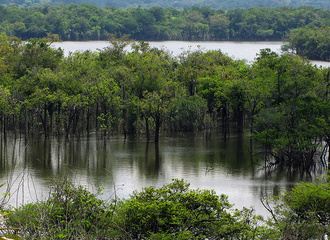