Adaptation to climate change? A practical guide from Vietnam

How do local people already arm themselves against the consequences of climate change? And what can other local communities and policy makers learn from them? The Centre for Social Research and Development (CSRD), a CSO from Vietnam and a partner of Both ENDS, produced an easy-to-read, practical guide to implementing various local adaptation measures.

According to the World Bank, Vietnam is one of the five countries that will suffer the most from the consequences of climate change. The dry season is already shorter than it used to be and the rainy season is wetter: droughts alternate with extreme floods. The changing weather conditions lead to failed harvests, dying livestock, and a lot of damage to houses, roads and the electricity grid. The sea level will probably rise, causing the coastal area to become more brackish.

ADAPTS
The ADAPTS program which Both ENDS initiated in 2008, together with the Institute for Environmental Studies (IVM) and ACACIA Water is specifically aimed at bringing local adaptation measures to the attention of national policymakers, so that these can be supported in plans and policies of the water sector.

Low-cost and easy to implement
Within the framework of the ADAPTS program, CSRD visited a large number of communities along the Huong River Basin in Central Vietnam to assess their climate risk perceptions and to identify ways in which they are already adapting to climate changes. This resulted in the identification of various local, mostly low-cost adaptation measures that have proven to be highly effective. Most of these simple measures have been developed by the people themselves.

Source of inspiration
This demonstrates that climate change adaptation advisers and policy makers must work collaboratively with local communities to build on local knowledge and local responses to changing conditions in developing climate and adaptation strategies and policies. This simple handbook is intended as a practical source of inspiration for vulnerable communities and authorities in Vietnam, as well as in other countries similarly impacted by climate change.

ADAPTS and Both ENDS 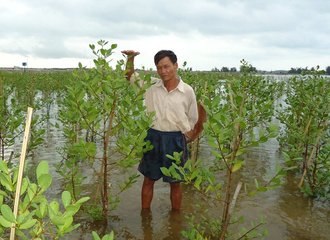