Oil palms, water and women: gender in the watershed

Photo Blog - Like many communities in Indonesia, life in Semanga Village, West Kalimantan, revolves around a river. The 90 or so houses follow the curving bank of the Sambas River, each with a path down to a small pontoon where fishing traps and baskets are stacked and boats are tied.

For generations, the river has been the foundation of the community's prosperity and welfare; it gave them fresh drinking water, it's their highway to the nearest city, it's a primary source of food, a place to bathe, wash, and play, a source of livelihood, it flushes their toilets, it washes away their waste, and it's ebbs and flows in the wet and dry seasons mark the high points of the community's social and cultural calendar.

"...and then the plantations came." 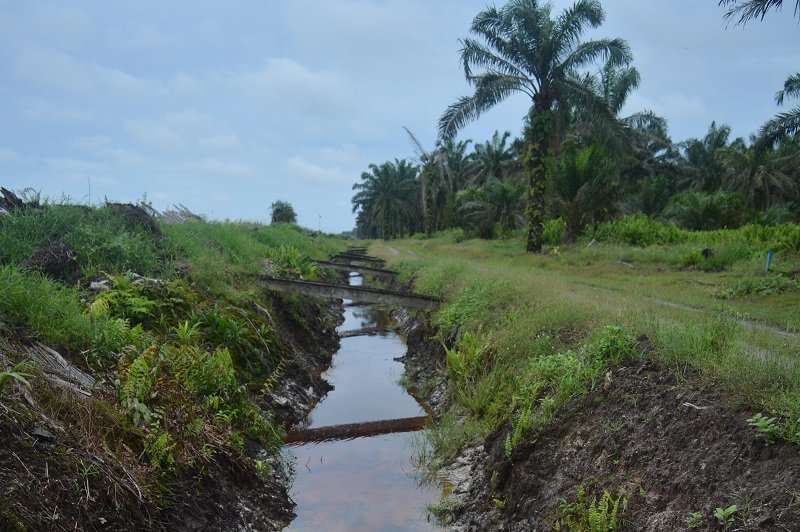 Drainage canal in an oil palm plantation near Semanga

But the river began to change when palm oil plantations arrived in the late 1990s, and life for the people of Semanga has changed with it. Earlier this year I visited Semanga with our local partner organisations Ecoton and Gemawan. The stories I heard were both heartbreaking and inspiring.

Palm oil plantations have become infamous for their environmental and social impacts, but still relatively little is known about the impacts of palm oil plantations on local water supplies and watersheds. This is why Both ENDS is working together with partners in two districts in West Kalimantan to support local communities to understand the impacts of surrounding palm oil plantations on their rivers, water sources, health and livelihoods. In Semanga, Ecoton and Gemawan are working with women to identify and map river contamination under a research and advocacy project jointly supported by ELSAM. 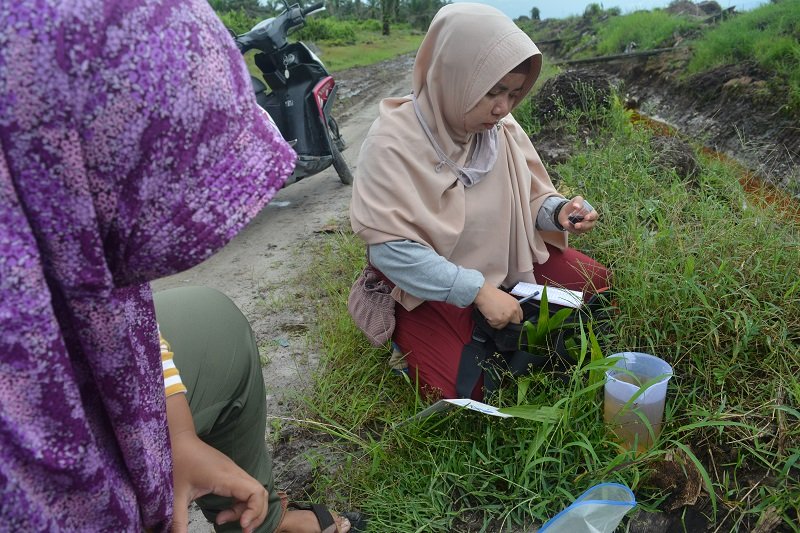 "We know the river is sick."

The people in Semanga know the river is sick with pollution. The Sambas River and its tributaries that flow past the plantations previously provided shelter and breeding grounds for many fish species. The river was known for its giant freshwater shrimp. Now the waters are chocked with toxic run-off from the plantations and palm oil mills upstream. There are very few fish and many fish species have disappeared, including several from the IUCN's Red List of Threatened Species. It's been years since a giant shrimp has been seen in Semanga. 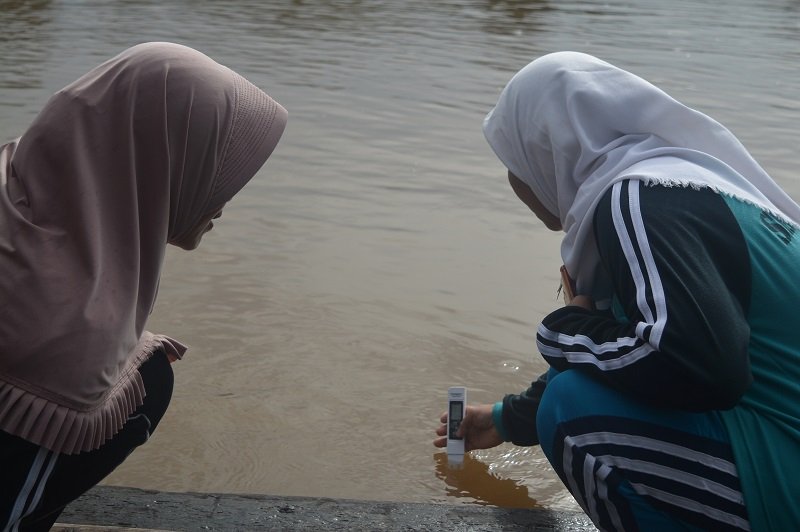 'Fisherman' is no longer a feasible occupation in Semanga.

So, many villagers now rely on their small plots of rubber trees and labouring on the plantation for their livelihood. Both are extremely hard work, with men and women travelling to their rubber plots at around 3am every day before the hot sun rises, to tap rubber in the dark. At 7am they return home for breakfast and to see their children, before heading to the plantation to labour until the early afternoon.

Women bear the brunt of these impacts, as they must also tend to household duties like washing, cleaning and cooking, and looking after their children. Women also work as 'sprayers' on the plantations – labourers that spray pesticide and herbicide and spread fertilizer, as men are employed to do the heavy lifting; harvesting bunches of fruit from the tall palms and loading them onto trucks for transport to nearby mills. Sprayers are rarely provided with adequate safety equipment and, unsurprisingly, many also suffer chronic health issues related to long-term exposure to dangerous chemicals.

"The river is smelly and leaves an oily feeling on your skin that can't be washed off." 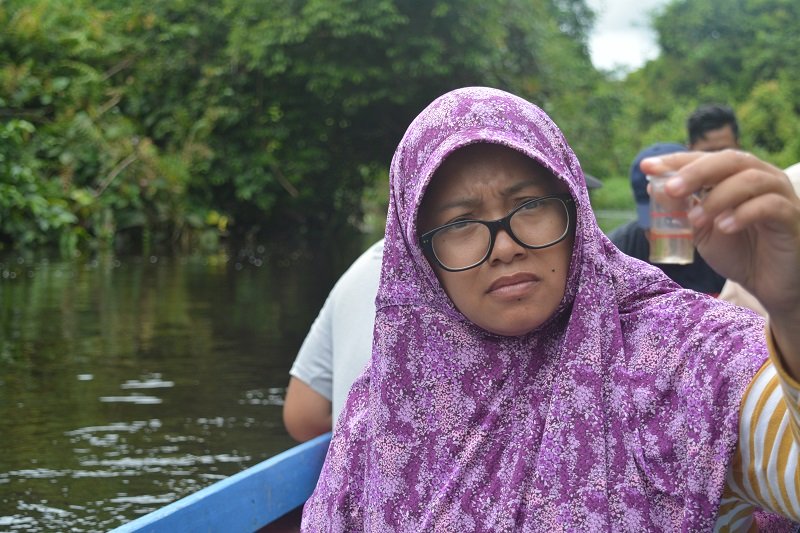 And there are more problems. Now that the river is too polluted to drink, each family must collect rainwater during the rainy season. When their water supplies run out in the dry season, they must buy drinking water at the nearest town or collect water from upstream springs. Given clean water is scarce and expensive, all families still wash and bathe in the river, and their health is suffering. Everyone in Semanga suffers from skin irritations; a red itchiness that doesn't go away, and a greasy feeling that doesn't wash off. This especially effects children, who like to swim and play in the river, and especially during the dry season when the river water is low and level of contamination is higher. I ask the women how the people in the community can tolerate the itchiness and irritation. They answer simply that this is 'the new normal' in Semanga – people have no other choice but to accept it. 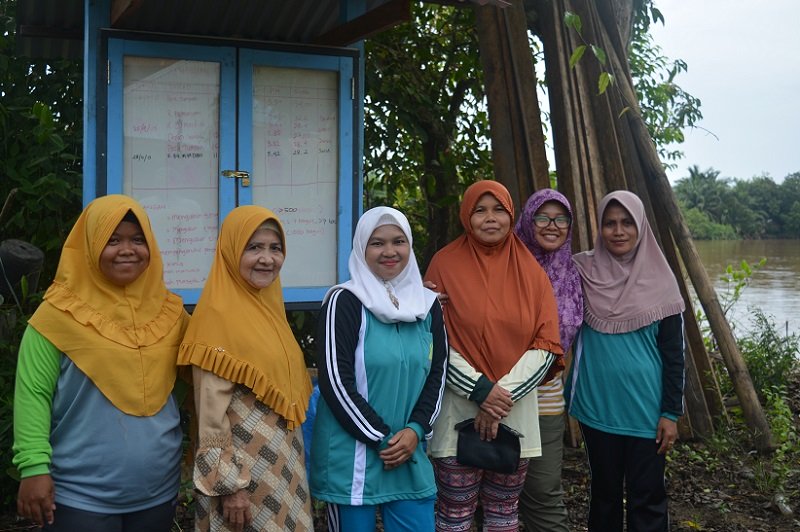 Members of the KUMPAI women's group in front of the community notice board where they record their test results.

To help the community map and understand the connection between the plantations, the river, the fish stock and their health, Ecoton, Gemawan and ELSAM are training a group of local women to test the river water for various contaminants and to communicate the results and implications to the rest of the community. The women, who call their group "KUMPAI" after a giant grass that grows in abundance in the shallow waters of the river, update a notice board in the community with their results. They use indicators like PH, heavy metals, solid matter and bacteria to track the health of the river. They also speak with women who work on the plantations about the kinds of pesticides, herbicides and fertilizers they use, what safety equipment they are given, and whether they suffer any health issues. 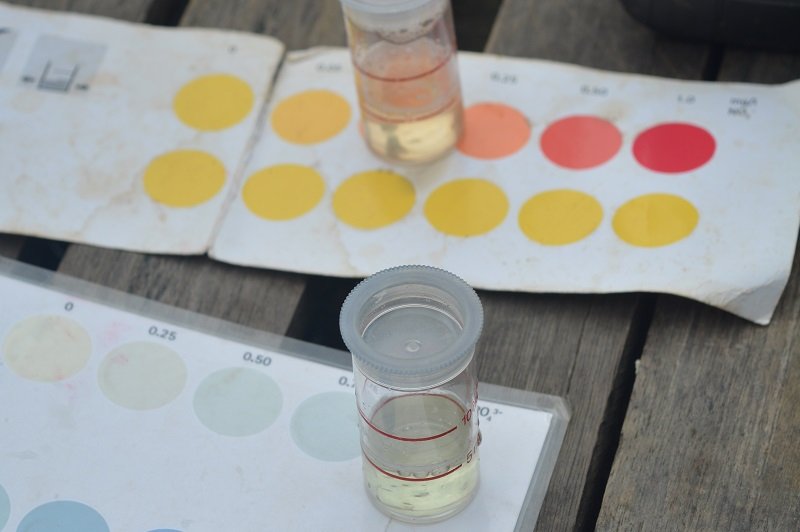 It is hoped that linking the pollution in the river to the chemicals used on the plantations will open doors for the community to start discussing possible solutions with local authorities and political representatives.

However, the KUMPAI women are worried that if they raise their concerns about the pollution in the river, other community members will not support them, especially if they implicate the palm oil plantations where many people in the village now work and rely on for their income. The Semanga community is caught in a cruel trap suffered by countless other communities in palm oil plantation areas – after the plantations destroy their livelihood, they have little choice but to work on those same plantations to survive. 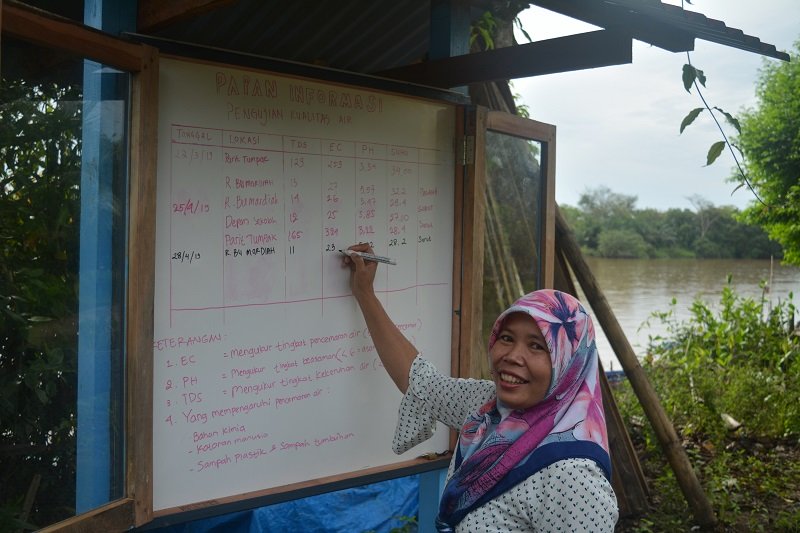 A member of KUMPAI updates the public notice board with today's results.

Nevertheless, the KUMPAI women are leading by example and raising awareness in the community about pollution, health, hygiene, sanitation and waste management issues. Slowly they are building support within the community and momentum to tackle the river pollution and the powerful plantation companies behind it. Their stories are inspiring others – including me – to have hope that another 'new normal' is possible in Semanga, where the community is united around a healthy river brimming once again with life.

"The pollution needs to be stopped somewhere and it can start with me." 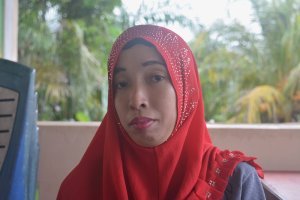 Atika, a member of the KUMPAI women's group

"I joined KUMPAI because I was curious about what was happening and I hoped I would learn new skills. I feel responsible to help the river because it is now so polluted by the oil palm plantations and other waste. I wanted to act, but wasn't sure what I could do. My husband used to be a fisherman but his livelihood has been ruined. Now he travels to Sanggau [about 600km away] each year to help with the honey harvest. When he is in Semanga he lays fish traps every three days but the catch is so small it cannot support our family. During the dry season there are no fish at all.

The pollution needs to be stopped somewhere and it can start with me. I hope to see the fish return and that people will stop throwing their garbage into the river. Being part of KUMPAI is key to achieving that." 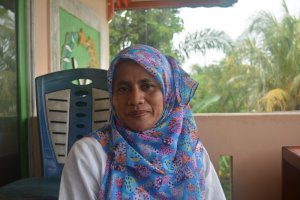 Siti Hajar, a member of the KUMPAI women's group

"I like to try new things and be involved in community life, so I agreed to be involved in KUMPAI when I heard the group would have a focus on the river. The river is a source of life, so the health of the river is important for me. Before the palm oil plantations arrived, we used the river for drinking and cooking, but now it can't be used because it's not safe. Now sometimes when we bathe there is a yellow colour in the water that we can't wash off with soap. We all suffer itchy skin in the dry season. I hope the next generation will be able to use the river again like we did as children."

"I'm worried about my children's health and the future of all children in the village. I decided to do something about it" 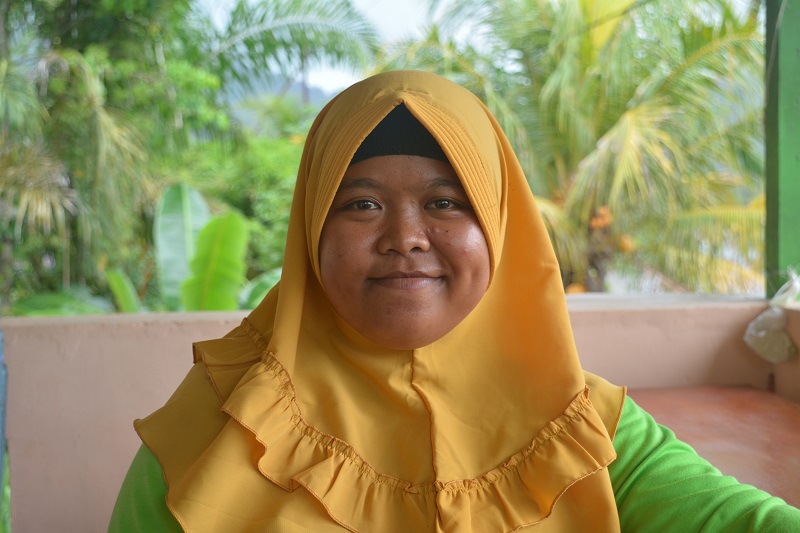 "My family's livelihood depends on the river, I wash my clothes in the river, I bathe my children in the river and we all used to drink from the river. Since joining KUMPAI I've become very conscious of the river pollution and my own waste. I see families throwing their rubbish and children's diapers in the river. I'm worried about my children's health and the future of all children in the village. I decided to do something about it, so I bought washable nappies from the city and introduced them in in the village. Now I sell them here. I hope to convince all women in Semanga to use washable nappies so that soon there won't be any diapers floating in the river anymore."