The United States Senate has sent a letter to the US Treasury, calling for better enforcement of the World Bank’s social and environmental rules. These rules, the so called ‘safeguards’, are meant to prevent the World Banks projects from causing social and environmental damage. But these safeguards are not always adhered to, and are likely to become even weaker as the Bank’s Board is currently revising them. Therefore, Pieter Jansen from Both ENDS, together with different partners from civil society organisations from all over the world, informed Republicans as well as Democrats about the negative consequences of the investments of the World Bank on local communities. Successfully, as the letter shows.

The projects the World Bank invests in often have unintended negative consequences for people and their environment.  The Anuak population in Ethiopia, for instance, used to live in wide stretched natural lands, but now have to live in refugee camps because this land was taken away from them. The social-economic project which was started by The World Bank in Ethiopia, resulted in the Ethiopian government confiscating Anuak-land to give it away to the Tigray, the dominant ethnic group in the country. The Anuak were denied access to their land, their natural resources and their food supply. For years, Okok Ojuli, an Anuak himself, worked for the project executed by the World Bank in the region where he was born. The project turned out to be a nightmare: instead of helping people, it caused a lot of suffering.

After having resigned from the World Bank, Okok is now tirelessly drawing attention to the situation of his people. Unfortunately the Anuak are not the only people suffering from a World Bank investment: the Banks projects often lead to forced relocations of indigenous people without proper compensation. The World Bank Board has been reviewing its safeguards since 2012, to adapt them to the demands of present times. In practice, this means current safeguards will be further weakened and this will only worsen the position of local communities.

The demands of the US Senate

In its letter, the US Senate stresses that the World Bank should at least maintain the following safeguards: project developers have to hand in a decent environmental impact assessment before a project is accepted by the World Bank. Relocation plans – if necessary – should go hand in hand with plans to adequately compensate people affected, and should be made before starting a project. ‘The World Bank is planning on making its customers responsible for maintaining the safeguards’, says Pieter Jansen. ‘This is all very well, according to the Senate, as long as it is thoroughly checked. The World Bank would have to design a judicial frame in order to make this possible. This would also enforce the grievance mechanism of the bank and make it easier for people to participate in discussions about new projects, according to the obligatory Free Prior and Informed Consent.’

The United States are a big shareholder in the World Bank and as such has a big influence on the Bank’s policies. The Senate’s letter is a big support for the work of many NGO’s around the world such as Both ENDS, who have been pledging for years to strengthen the safeguards and promote their enforcement. Both ENDS will continue these efforts, to prevent local people from suffering the way the Anuak and many other communities did and unfortunately still do.

Links to more info about World Bank Safeguards on our website 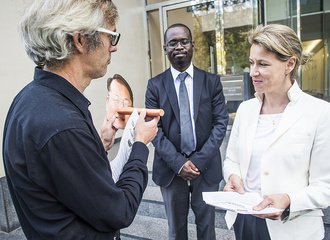