A global campaign against the power of corporations widely violating, human rights was launched during the Peoples Summit in Rio de Janeiro. Both ENDS is one of the dozens of national and international organizations supporting the campaign and the contents of the press release below.

'Global Campaign to Challenge the Power of Corporations Launched in Rio'

June 18, 2012, Rio de Janeiro-  Dozens of civil society organizations from around the world have gathered today at the Peoples' Summit in Rio de Janeiro, Brazil to launch a global campaign to confront the power of corporations and their crimes against humanity. In the face of the failed official Rio + 20 process, which has been systematically co-opted and corrupted by transnational corporations, this campaign strives to unite hundreds of struggles, campaigns, networks, movements and organizations that are fighting the different ways transnational corporations are negatively impacting human rights and the rights of nature in every corner of the planet. The campaign denounces the corporate agenda of Rio + 20 to commodify nature. To put this campaign into action, there will be a rally at 6:00 PM, June 19th, from the Peoples' Summit toward Largo de Carioca to confront the abuses of Brazilian energy and mining giant Vale.

The campaign has been initiated by several national and international social movements, including campaign networks resisting transnational corporations. Over 100 groups from peasant, labour, women's, environmental justice and faith based movements from both the global South and the global North have joined the campaign. Nnimmo Bassey, the president of Friends of the Earth International commented that "this kind of global campaign is long overdue, and is essential when fighting contemporary transnational corporations who operate globally, moving from one country to another using the same strategies to generate profit at any cost."

According to the campaign call for mobilization, a primary focus of this campaign is to establish mechanisms of global solidarity and action between civil society and social movements to stop violations by transnational corporations and defend the rights of peoples, communities, and nature. Two of the main goals will be to develop binding obligations and regulations for TNCs and to build the foundations for an international mechanism to judge the ecological and economic crimes of corporations and impose sanctions. Brid Brennan from the Transnational Institute commented that "the process that we have launched here in Rio will set in motion a broad global debate on the illegitimacy corporate power, as well as to create the necessary tools and spur the mobilizations to challenge and ultimately eliminate the impunity of TNCs."

Henry Saraghi, General Coordinator of la Via Campesina said that "this campaign is especially important when we are witnessing the rebranding of capitalism through the design and implementation of the corporate green economy at Rio + 20, which has been devised as a clever way to cheat nature and continue business as usual." Campaign convenors stress that in order to confront corporate power and the system that protects and benefits TNCs, it is necessary to give a systematic response by uniting experiences and struggles, to establish food and energy sovereignty, reclaim public services, protect common goods and to advance solidarity economies. The call to action for the campaign firmly announces that "community resistance against a transnational corporation could be even more victorious if we are able to unite them with the efforts of other people in other countries, regions or continents."

Campaign website: Stop Corporate Impunity
or look at our Facebook-page 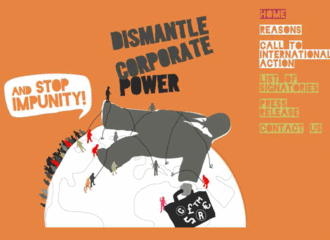