In July this year, 120 nations voted in favour of a UN resolution confirming the rights to water and sanitation as human rights. Recently, however, all references to human rights have been removed from the draft text of a United Nations General Assembly resolution on a separate drive for sanitation. This change in the text removed the obligation of states under international law to report to the UN on progress in providing their citizens with access to clean water and sanitation. On November 23, the final version of the text is due to be completed.

While overall progress on the Millennium Development Goals has been positive, progress on access to sanitation is lagging far behind. This has a negative effect on public health, most importantly because more than 80% of all contagious diseases is waterborne. Diseases flourish when there is inadequate access to sanitation, as evidenced by the current outbreak of cholera in Haiti. Not considering access to water and sanitation a human right means a serious setback: progress will depend on the political will and budgets that individual states reserve for such water and sanitation projects.

It is not clear who removed the references to human rights from the draft text. Japan, Panama and Jamaica are sponsoring the UN resolution on sanitation and have approached the Netherlands to mediate negotiations on the outcome document. However it would appear that (some of) the same negotiators removed all references to the human rights framework, resulting in an empty statement without concrete commitments.

Unfortunately by holding the position of chair, the Netherlands has lost an opportunity to make a strong statement on the right to water and sanitation.

Both ENDS is a member of the WASH (Water and Sanitation Hygiene) coalition. In the next five years, WASH will implement water and sanitation programmes in eleven countries, mostly in Africa. If access to water and sanitation would be a human right, the legal base for action would be much stronger. Both ENDS and WASH therefore call upon individual states to only ratify the final resolution on sanitation if a clear link is made to the human rights framework laid down at UN earlier this year.

Photo by 'Water for Sudan' 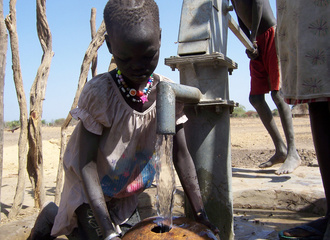