Various donors and funds promised to make donations to support the pan-African Great Green African Wall (GGW) against the desert. This became clear during a meeting of the UN Convention to Combat Desertification (UNCCD) in the last week of February. In sum, these donations could mount up to around 3 billion US dollars. The envisaged 15 kilometers wide and up to 8000 kilometers long wall consisting of plants and trees will cross 11 countries south of the Sahara. The difference between failure and success will depend on the way the project is executed.

The GGW is aimed at limiting the desertification of the Sahel zone. It will stretch from Djibouti in the Horn of Africa in the East, to Dakar, Senegal, in the West.  Plans already existed in the 1980's but were never executed. The idea was voiced again some 20 years later by Nigerian President Olusegun Obasanjo, who presented it to the African Union (AU) in 2005. Since then, the project has gained international support outside Africa, which now resulted in the planned donations.

It is of course essential that restoring the soils, hydrology and vegetation in drought prone Sub-Sahara Africa receives full political and financial support. Still, some remarks have to be made when it comes to the way the plans are executed. Richard Escadafal, chair of the French Scientific Committee on Desertification, rightly points out that  "Projects in which reforestation was put in practice without the participation of local inhabitants were almost always limited and non-sustainable". In other words, local farmers' expertise and skills will have to be used in order to make the 'wall' a self-sustaining success. It has been proven that methods of natural regeneration can work even in very dry lands, with a minimum of water and other means. A good example is the 'Zai technique', which makes use of water infiltration cum compost pits and which was developed and improved by local farmers..

Also, security of use and ownership rights over the land and tree vegetation which farmers restore, is an essential pre-condition for success. This is proven by, for example, the stunning re-greening results in the provinces of Maradi and Zinder in Niger, where farmers - with some strategic support from civil society organisations and privates foundations - restored an estimated 5 million hectares back into a stable tree landscape.

In sum, it is crucial that local restoration methods are used, with proper choice of tree species and soil management techniques. Farmers need to be in the driving seat and are to be ensured they enjoy the control over the fruits of their labour. This begs the question: what institutional arrangements will be developed to ensure these financial commitments are used for real action on the ground? Will local farmers, NGOs, and institutions like semi- governmental extension agencies, local ministries of agriculture and environment, forestry services and domestic universities, be granted enough power to take control in the process to make it a success? Or will high level agencies and investors without proper presence and support amongst the local population dominate and determine the path that is to be taken? 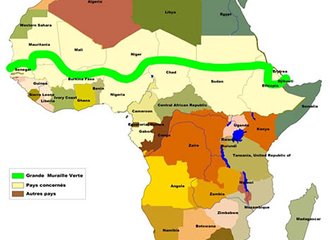