It can be hard to establish small-scale adaptation projects in developing countries, because governments, development banks and donors generally prefer to finance larger initiatives. Of course, a single large project is more visible and easier to manage than ten small ones. But it is extremely important that the very small-scale initiatives, which are based on the knowledge and needs of local communities, are supported. How can we ensure that these - often very effective - local projects find their way to the appropriate funds and vice versa?

This question kept cropping up in the debate held during the Political Café on 12 October at Café Dudok in The Hague. The Political Cafe served as a prelude to the climate summit in South Africa, and was organized by Both ENDS, IVM, Acacia Water and various southern partners. It forms part of their joint ADAPTS programme, which looks at how local communities protect themselves from the effects of climate change, such as extreme droughts and floods. The programme follows communities in six river basins in various African, Asian and Latin American countries. The methods used are scientifically tested and improved upon, where necessary, and local stakeholders are given the support they need to take a more active role in decision making. So doing, local ideas are replicated in other areas and can be scaled up to become policy.

Governmental representatives and delegates from the local organisations behind ADAPTS met in the Netherlands this week to share their project results from the last three years. Bob Alfa, of the Water Resources Commission, a government agency in Ghana, and Suu Lam, director of the Vietnamese NGO CSRD were part of the panel at the Political Café. The other two panellists were Christophe Nuttall of the UNDP and Sjoera Dikkers, Member of Parliament for the Dutch Labour Party (PvdA). In the audience were interested parties, and representatives of the government and other NGOs.

Everyone agreed that programmes such as ADAPTS deserve to be supported, the only question is how. There are plenty of donors and funds looking for worthwhile new projects, but these initiatives remain off the radar and are not supported often enough. Currently, most climate funding is issued through major climate funds, which primarily work through national governments. Examples include the Climate Investment Funds, the Global Environment Facility and the UNFCCC Adaptation Fund.

The fact that UNDP has funds left over due to a lack of suitable project proposals, raised the question of whether the extensive criteria projects have to comply with aren't grinding many worthwhile projects to a halt. It was suggested that the bundling of several small project proposals in a 'package-proposal' could be a way for small projects to still have a chance with the major funds and donors. Furthermore, major funds and development banks should be looking for new financing systems: ways to ensure that money trickles through to the relevant players in the field. In doing so, the donors themselves will have to play a creative and leading role, as Sjoera Dikkers rightly commented.

Both ENDS remains committed to making locally supported policies and initiatives visible on the international stage so that they can find their way to the funds and become a serious alternative to major climate funds. 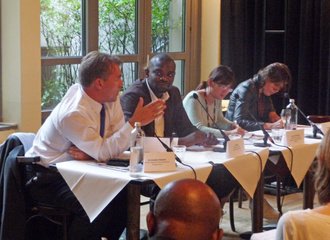