From 7 to 18 november, the Climate Change COP22 will take place in Marrakech, Morrocco. This '22nd Conference of the Parties to the United Nations Framework Convention on Climate Change (UNFCCC)' as it is called officially, is the annual meeting of the 195 countries which have signed and ratified the convention.

This Conference of Parties, taking place a year after the big climate summit in Paris last year, will focus primarily on the implementation of the Paris agreement which entered into force on November 4 this year.

Also on the agenda are issues like climate finance (the 100 billion dollar roadmap) the 2018 review of commitments for mitigation (lowering the emission of greenhouse gasses) and transparency.

Sabina Voogd of Both ENDS will be joining the CoP to actively follow the negotiations on climate finance, adaptation, gender and trade. She will participate in the demonstration which will take place on the 12th of november and during her stay in Marrakech she will write at least two blogs to keep us posted on what is happening. Also, together with Action Aid and IPACC Both ENDS organises a side event:

Nathalie van Haren of Both ENDS will also be present for a few days, especially to meet up with our Drynet partners. Together, they wrote a Consultation on the environmental and social standards of the Land Degradation Neutrality Fund. On the morning 11th of November, Drynet organises a side-event called 'Where to Agriculture in the UNFCCC' (see also invitation at the bottom).

Together with partner organisations in the Global South, Both ENDS has been working on the issues of climate change mitigation and adaptation and on climate finance for many years. Below, you'll find an overview of what it is that we do in this respect. 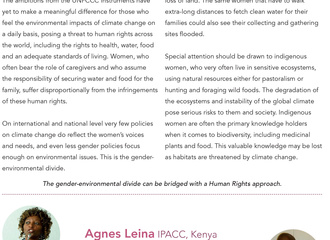