It’s the Annual Meeting of the World Bank Group from 8-13 October 2013 inclusive of the Civil Society Platform space of the Bank. It’s a Washington Congestion! where many NGOs, CSOs, Indigenous Peoples representatives, protestors, disabled people representatives seeking equal space in development agenda of the Bank, and many more…….of government and private sector representatives landing here in at this Annual Meeting to bring to the Bank their problems, concerns and agenda like us trying to bring about some policy changes in the Bank’s Safeguards Policy. We have timed this visit with the ongoing safeguards policy update.

Our strategy was twofold: one was to meet decision makers in the Bank and US Government and the other was to present our case(s) in self organized meetings at the civil society space of the Bank. Our key message and focus was on Forest with other associated issues. I had my work tailored from the field work conducted back home in North East on a World Bank funded project known as the North East Rural Livelihood Project (NERLP). 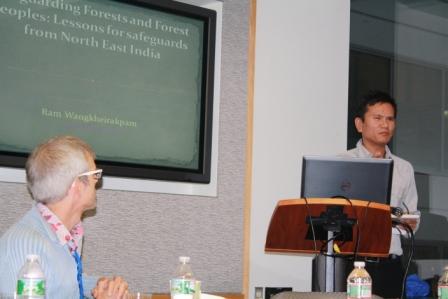 The  Session we organized was themed “Safeguarding Forests and Forest Peoples: Lessons from Indonesia, Colombia, China and India in the context of the WB Safeguards Review”. In the context of the World Bank Safeguard Review and proposed Bank support for national biodiversity offset plans, our panelists presented an overview of concerns related to WBG forest policies and activities including Bank support for industrial-scale logging in tropical forests, the use of biodiversity off-sets to compensate for the degradation and destruction of critical natural habitat, and the intersection of illegal logging, forest destruction and money laundering.

My case was simple. There is an urgent need to recognize, advocate and support the very close relationship between communities and forest, both as a way to sustain their livelihood but also to protect forest, and that the current Bank’s Forest Policy falls short of recognizing these relationships.

Congestion can be sensed not only because of the non-deniable number of people visiting the Bank with their complaints and concerns. Communications between civil society groups and the bank falls short as well due to congestions in the wording of problems and solutions.

Modifications of meaning have slipped into the language of the bank and even of the language of us people talking with the bank. In preparations for the meetings we read the forestry policy precautious.  Already the meaning of a very essential words as forests and poverty proves out to be ambiguous and can be interpreted in different ways, let alone the meaning of consultation, consent or reforestation. Is the Bank saying that to earn money out of forestry, people should no longer depend on forests but start growing cash-crops? Whenever one comes across a mix of projects, poverty reduction, sustainable development, participation  and similar terms, one knows that the dogma  of ‘governance’  is at its disturbing work, to provide a political sanction for neoliberalism.

The North East Rural Livelihood project as it boldly claims, as also in all other projects, will reduce poverty of the project villages, and this will be achieved by introducing ‘new’ sustainable institutions, governance structure and funding including through self-help groups. The bank completely ignores the fact the existing institutions, laws and livelihood system(s) are indeed the real sustainable ones as it has managed to fight back modern aggressions for ‘change’. It is through them that the people, culture, livelihood and the forest biodiversity have been maintained in the region. The North East region holds 6th among the 25 Biodiversity Hotspots on earth. This has not happened by fluke but by the worldview and systems that Indigenous Peoples of this region holds. It is also known through studies, that community owned and protected forest are better than those under government or private sector managed ones. This is true not only for the region we are concern here but also for several parts of the world where communities live closely interwoven with their forest.

The project does not say that this operation is in a forest area, but the fact is that this project is in Jhum or Shifting Cultivation areas, where the concept of forest and agricultural area cannot be completely differentiated. What is forest land can become an agricultural patch of land used for 1-3 years then again slowly becoming a new forest again. Given that this project is mostly in Jhum land, it is critical for the Bank and the project implementers to understand the critical link between communities and forest and their livelihood.

To still see the wood for the trees,  our visit to the Bank and our policy work on safeguards mostly of all end up in  fights for getting  little enough public space to have arguments with the bank and fights for reclaiming  the  meaning of words.