Last month I visited COPINH in Honduras. I stay in their house where I've been before. It has changed.The walls are decorated with colourful paintings, and there are altars for Berta Cáceres, their former leader who was murdered in March 2016. Instead of a simple fence, the building is now being protected by a thick wall with barbed wire. There are security camera's everywhere. 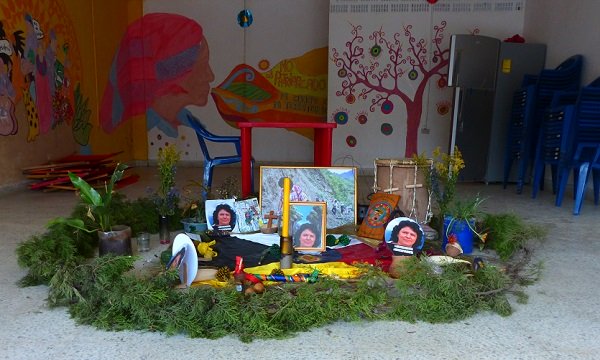 The next few days, I will talk to the members of COPINH and visit Rio Blanco the community where the controversial Agua Zarca dam* is being build.

Resistance underneath the oak
Early in the morning I leave for Rio Blanco. A large group of people is waiting for me underneath 'the oak'. Here in 2013, the community blocked the road towards the river, forcing the company to construct the dam from the other side of the river. From the hilltop we look over the green fields and the forested hills. One of the community's elders has constructed a little altar for Berta. Several community members hold a speech. 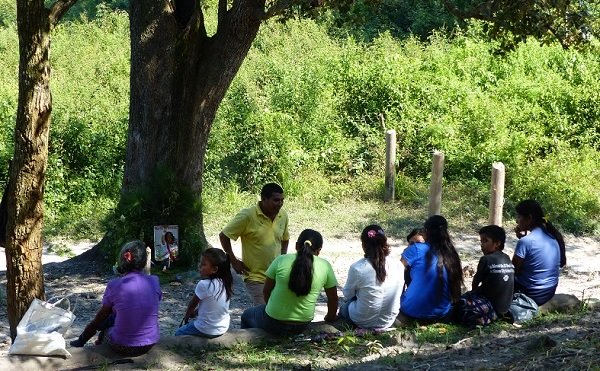 Meeting underneath the oak

The dam has led to rising unrest in the community. Maria explains: "Before the company came, the community was so beautiful and precious. There was no risk to get killed, we could sleep outside." The murdering of their leader Berta has convinced the community members even more: "Berta lost her life in the fight for our territory, for life, now she has become a guardian of the river." Lucio, one of the local leaders, expressed the militancy of the community: "It doesn't matter if they kill us, we will not give up until we have defended our rights. We disagree with whatever plan they [the banks] have, because they have proven to be liars."

A free river makes us happy
I stay an afternoon and the night in Rio Blanco. With some village boys I descend to the river. During the walk, they are shy and quiet. We cool of in their magical river and climb on a rock in the middle. Then they start talking: about how much they like swimming in the river, about the good corn harvest, about Berta, about all international visitors they have already received in their community. We laugh and we dive off the higher rocks. When we dress ourselves and walk up again, the silence returns. 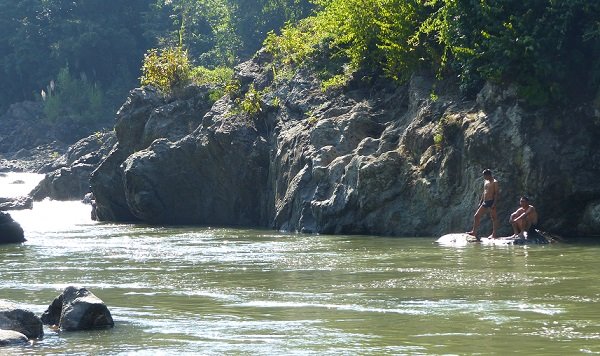 Swimming in the magical river

The Lenca people are living in close connection to the nature that surrounds them. To understand what 'defending the territory' means to them, you have to be there, swim in the river, stroll through the corn fields, see the clear starry sky and witness rituals along the river banks on your bare feet. One of the older community members explains why he is fighting the dam: "A free river makes the heart happy." Now how do you explain that to people whose only understanding of 'development' is in terms of economic development, of money and profit?

COPINH and the fight against 'green capitalism'
Back in the office of COPINH in Intibuca, I speak with the daughter of Berta Caceres. After the murder of her mother, Bertita (she was named after her mother) interrupted her studies to support COPINH. Bertita grew up with her mother's the struggle, as previously her sister Laura explained to us. The loss of Berta is difficult for COPINH, it is an emotional shock, they lost their strong, inspiring leader while at the same time the international attention and pressure increased. In the Honduran media COPINH is constantly being criminalized, and local leaders are regularly threatened with death.

Rio Blanco is not the only place that is threatened by a project. Within the Lenca territory, 49 concessions have been issued without the consent of the communities, almost all of them dams and wind farms for 'green' electricity. Bertita explains that COPINH sees this as 'green capitalism': "Covered by nice words, the exploitation and expropriation of our land continues, in a more advanced, better prepared way. But as long as our rights are not being respected, as long as our voice is not being heard, they can promise whatever they want: we will not accept their projects."

No more confidence
The struggle against the Agua Zarca dam is a symbolic struggle. In January 2016, Berta Cáceres told me: "If we can't stop this dam, we can't stop nay other project." And while FMO is looking for a responsible way to withdraw from the project, Bertita explains to me how difficult is has become for COPINH to believe them: "Already in 2014 we sent letters to FMO, they knew what was happening and they never did anything, until their reputation was at stake." I also talked with Tomas Membreño, Berta's successor as the new coordinator of COPINH. He has a clear message to FMO: "We want them to pack their bags and leave. Today." 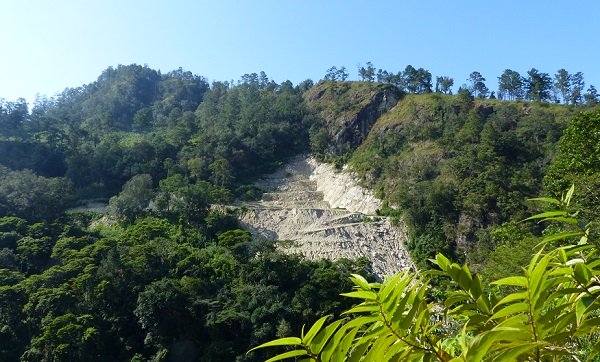 * About Berta Cáceres and the Agua Zarca dam:
In March 2016, human rights activist Berta Cáceres was murdered in Honduras. She was the coordinator of the indigenous organization COPINH and fought for the rights of the indigenous Lenca people in Honduras. One of the major conflicts in which Berta was involved is the construction of a dam in indigenous territory, Agua Zarca, where also the Dutch development bank FMO is involved.

FMO entered into the Agua Zarca project in 2013. Berta repeatedly sent letters to ask FMO to withdraw their investments, because according to her indigenous rights were violated and the project did not benefit local communities. After Berta was murdered, FMO suspended its investments in the project. Since then, FMO is looking for a responsible way to definitively step out of the project.

The conflict around Agua Zarca is complicated. There are also local communities that say to have benefited from the construction of the dam. However, from the start of the project the opposition to it was not taken seriously. In the Honduran context of violence, corruption and impunity this has led to this conflict, in which companies, governments and banks have much more power than local communities who defend their rights. Both ENDS is committed to these people who defend their rights and supports COPINH to influence FMO.