This decision comes in an international context in which the annual financial commitments of donors to the water and sanitation sector has been declining for the last five years, and in which many states lack transparency with regard to their commitments to supply water and sanitation services to the poor. The possibility of embedding the human rights obligations of these actors in international law enables action to be taken in the field of poverty alleviation independently of political will.

While states are neither obliged to provide water and sanitation free of charge, nor are they required to provide these services immediately, they are required to demonstrate how, within the limits set by their budgets, they have acted to achieve the progressive realisation of these rights. They must demonstrate concerted efforts to inform the populations concerned of the budgets allocated towards water and sanitation, of the plans for infrastructure development, and efforts to involve local populations in decision making on interventions affecting their livelihoods. While investments in water and sanitation by governments and bilateral aid agencies have tended to invest in middle class areas and have been least effective in reaching the poor, the concept of non -discrimination henceforth requires investment in human beings irrespective of income levels.

At present, Germany, the Netherlands and Spain have actively integrated this thinking into their development policies. In the rest of Europe there is still resistance to such levels of transparency, especially where urban services companies are pressuring their governments to seek foreign markets. The poor are generally commercially uninteresting and trade agendas undermine development policies. However in these countries also, human rights are the foundation of democratic thought, and thus there is new hope that 2,5 billion people may some day have access to something as basic as a toilet as well as the health benefits that go with this. 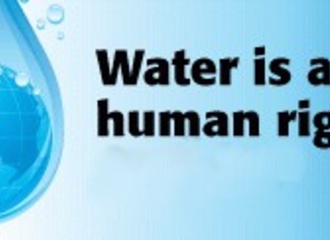