Recently, India has terminated its bilateral investment treaties (BIT) with 57 countries, including the Netherlands. This means Dutch companies in India, and Indian companies in the Netherlands, can no longer make use of the controversial arbitration procedures called ISDS. According to Burghard Ilge from Both ENDS, India's action is a step in the right direction. However it is a missed opportunity that the Dutch government did not agree with this termination. This way, old investments stay protected for 15 years under the former BIT.

BITs are often detrimental for developing countries, as they provide extensive protection for foreign investors through the ISDS arbitration procedures. Investors who believe they are effected by policy changes can claim billions from the state. "This gives businesses an undesirable power position," says Burghard Ilge. "Companies can put pressure on governments and frustrate legislation, which is often urgently needed to better protect people and the environment."

By unilaterally canceling 57 BITs, not only with the Netherlands but also with the United Kingdom, France, Germany and Spain, India has taken significant steps to mitigate this ISDS system. With consent of the Netherlands, the risky old investment treaty could have been completely disabled. As the Netherlands have failed to do so, the old treaty remains valid for another 15 years for investments done before December 2016. This was a bad surprise for Burghard Ilge: "Previously, the Dutch government stated that such BITs are undesirable. By agreeing to the termination of the treaty between India and the Netherlands, we would have dismissed the whole contract at once."

Meanwhile, negotiations are being held about a new investment treaty between India and the European Union, which has taken over this responsibility from the member states. India has set up a new model BIT, which is a significant improvement, according to Burghard Ilge. "Yet, the changes are not enough. It still contains ISDS in some way, and in Both ENDS' view ISDS should be taken out completely. A new approach in investment treaties is necessary. We will continue to watch the negotiations and share our analysis of the treaty with policymakers and NGOs in both the Netherlands and India when necessary. We would rather not see any new agreement in this form."

Read more about this topic: 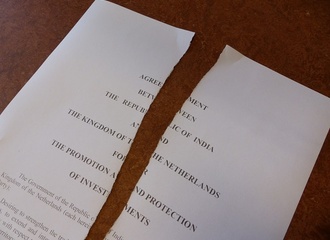