Both ENDS saw a lot of positive changes happen in 2010. Governments, research institutions, NGOs and businesses have a growing focus on 'green' strategies. Still, sustainability is not a matter of course in the current global economy. In order to reach that goal, a lot of work still needs to be done. Both ENDS intends to continue its work and efforts and show that change is possible. Many small steps can make great change. For more details on our activities in 2010 take a look at our Annual Report.

In order to keep being able to work on issues related to sustainable development, Both ENDS has taken a new direction. With new financial partners, a strong focus on communication and a new corporate strategy Both ENDS is ready to face these future challenges.

Fortunately we see many positive developments in and around the local organisations we work with."Time and again, people in developing countries surprise us by showing that much more is possible than we could imagine", says Daniëlle Hirsch, Director of Both ENDS. "Partner organisations in the Sahel  - we thought to be one of the least fertile areas in the world - have managed to re-green the desert in 20 years. They demonstrate that within one generation, against the current and with small steps, you can achieve great things."

The example from the Sahel is but one out of many inspiring stories. The ADAPTS program is aiming to find the best ways for local communities to adapt to climate change. This program, in which we participate together with local organisations and scientist from all over the world, has started to show the first results in 2010. Another example is coal imported to the Netherlands, which is often mined in developing countries, in socially very unjust an environmentally very unsustainable ways. To make sure the so-called 'coal chain' would become more transparent, Both ENDS brought the social and environmental effects of coal mining to the attention of Dutch policy makers and energy companies. In response to that, a 'coal dialogue' was started in the autumn of 2010, aiming to make agreements which will bring transparency to the coal chain.

Both ENDS will continue to work towards its common goal: a green, fair world in which human rights are respected and in which we treat nature and its resources in such a way that they are accessible to all, now and in the future.

Read more about our activities in 2010 in our Annual Report 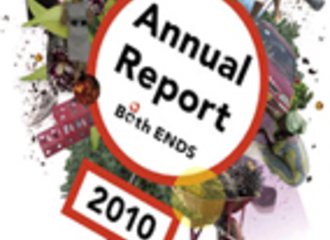