Home
>
What's new
>
News
>
'Trade is War': Yash Tandon on the impact of global free trade and the geopolitcs behind TTIP

'Trade is War': Yash Tandon on the impact of global free trade and the geopolitcs behind TTIP

On June 3rd at De Balie in Amsterdam, ‘angry old man’ Yash Tandon presented his new book ‘Trade is War: The West’s War Against the World’ – a new perspective in the debate on the Transatlantic Trade and Investment Partnership (TTIP), the controversial trade agreement which the EU is currently negotiating with the US. In Europe, opponents of TTIP are mainly concerned about transparency, ever-increasing corporate power and the impact on the environment. But what does the treaty imply for North-South relations and what are the geopolitical dynamics behind it?

The debate on ‘Trade is War’ – organised by TNI, SOMO and Both ENDS – places TTIP in a broader perspective. Tandon passes a devastating judgement on free trade. “Since colonial times, global trade has been aimed at Western world domination.” Is there hope for change?

The recent fuss about TTIP has reinvigorated the public debate about the costs and benefits of globalisation and free trade in Europe. “Therefore I am very pleased with TTIP”, Yash Tandon joked after the introduction by moderator Natasja van den Berg. Tandon clarified that he hopes TTIP will generate attention to the Economic Partnership Agreements (EPAs), trade agreements the EU intends to sign with African countries. “What TTIP is to Europe, EPAs are to Africa. These trade and investment agreements serve the interests of multinationals and undermine the legal sovereignty of participating countries. Not only do EPAs hinder the development of many Africans, they lead to growing inequality, violence and migration.”

"TTIP is a military strategy"
Tandon said to be surprised by the superficiality of the public debate on TTIP in Europe. "There is an exclusive focus on economic and legal aspects, including the dispute resolution mechanism ISDS (Investor-State Dispute Settlement). There is absolutely no attention to the geopolitical dimensions of the treaty." According to Tandon TTIP seeks much more than the creation of a transatlantic economic power block. "It is pure power politics. TTIP is a military strategy aimed at containing China and Russia."

"Fair trade is a fairy tale"

Tandon, who called himself an ‘angry old man’, not only targeted the business lobby, the political establishment in Europe and the US, and the World Trade Organisation (WTO), which he accused of presenting backroom decisions as consensual agreements. He was also angry with former Minister of Development Cooperation of the Netherlands Jan Pronk, who called the result of 65 years of development cooperation ‘positive’. And with the progressive left in Europe, who he blames to be complacent and Eurocentric. According to Tandon, Europeans buy fair trade products to clear their conscience. But fair trade does not even exist, he argues. “Fair trade is a myth that Western consumers use to protect themselves from taking actual responsibility. Trade is war and how can war be fair?”

“Trade is not aid”
The current Dutch policy for development cooperation, aimed at combining aid and trade, was severely criticised by Tandon. In his view, reports on economic growth in Africa, which emphasise the growing GDP in many countries, give a distorted picture. “The firm belief in the West that trade is good for the world does not reflect harsh African realities. Global free trade has had devastating consequences for people in Africa. In Uganda not only domestic industry has been destroyed, but agriculture has also been hit hard. In supermarkets in Kampala one buys European chicken legs, which are being dumped as a result of EU subsidies. Ugandan tea farmers receive only 2% of the final proceeds of their harvest. And that is no different in the case of fair trade tea.”

"A thousand new ships"
Among the audience Tandon’s pessimistic message mainly raised questions about the future. Is there hope for change? If so, what should be done to turn the tide? And are there positive practical examples? Benign trade is indeed possible, Tandon said, but to achieve it requires radical change. "Global free trade is a sinking ship. We need to launch a thousand new ships: self-sufficient communities that trade on the basis of the actual value of goods and services. Through regional cooperation and with the combined strength of social movements around the world, we can bring about change."

Yash Tandon (Kampala, 1939) is a Ugandan scientist, author, political activist and policymaker. He is the founder and chairman of the Southern and Eastern African Trade, Information and Negotiations Institute (SEATINI) and the former director of the South Centre, an intergovernmental think tank of developing countries. He has published many books and articles on development, globalization and trade.

More Information? Have a look at our previous items on TTIP:

7 May 2015: Proposed reforms of ISDS in TTIP definitely insufficient

17 April 2015: Join the TTIP debate at the Volkshotel in Amsterdam 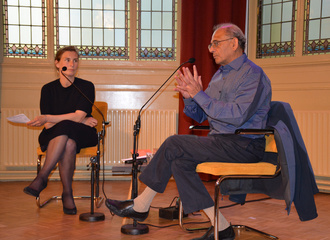