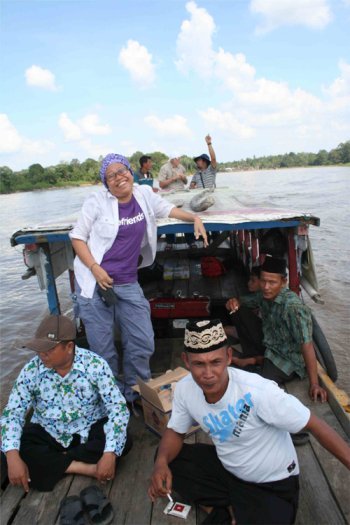 The road to Langgam was built by plantation companies and for hours on end, it leads us along palm oil and acacia plantations and lunar landscapes, degraded areas seemingly abandoned. The Kampar basin largely consists of vulnerable peat moors. Parts of the wooded areas have burnt down; plantation companies having deliberately started the fires, according to some. 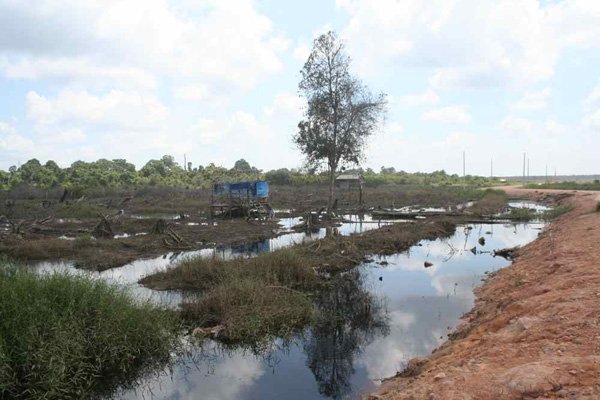 Downstream, there are two large acacia plantations of Riau Andalan Pulp and Paper (RAPP), APRIL’s largest subsidiary company for pulp. According to Friends of the Earth, RAPP runs the biggest pulp and paper factory in the world here in Riau. Later that week, we would take a RAPP ferry, see several ‘RAPP schools’ along the way, and Rob and his infected thumb would end up at a state-of-the-art RAPP-built hospital.

We are greeted with a sumptuous lunch in the house of Pak Zubir, where we will spend the night. There are several traditional adat heads present, each of a sub-district. Pak Zubir is adat head of the sub-district we are in now.

The river plays a central role in the lives of the people in Langgam. There is no sanitation; people use the river’s water for cooking and bathing. There are televisions, mobile phones and motorbikes. Most villagers fish for their own use and sell what is left at the local market. They don’t grow many vegetables in their gardens; food is bought at the market. The fishing-rights are divided between the different sub-districts through agreements between the adat heads, and are sold to the villagers at auctions. These fishermen get a reasonable income from it. Outsiders coming in to fish are heavily fined. 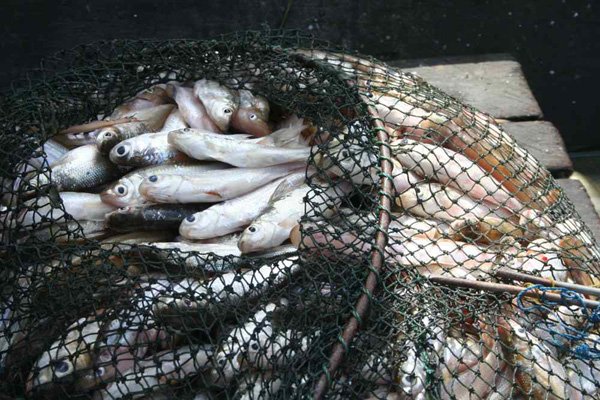 We ask the villagers if the river has changed over the last 20 years. They say the fish stock has decreased, and that the river has become more muddy. When asked, they don’t connect these changes to the omnipresent plantations; some of them work there.

After a delicious lunch with fish from the river, we take two pongpong boats that make a terrible racket.

We sail to a fish-assemblage part of the river, where fishing is prohibited. Parts of the river arms are silted up because of sedimentation. Rob suspects washed-down materials from the plantations are the cause: mud, leaves, branches and pesticides. According to one of the villagers, a plantation company has donated five water wells in other villages to compensate for the declining quality of the river’s water. Tomorrow we will drive to Teluk Meranti, a village downstream. I'm curious to see it!