Home
>
Our work
>
Dossiers in the spotlight
>
Suape: port expansion threatens paradise
>
Access dam blocking the free flow of water in and out of the Tatuoca estuary

Two projects insured by Atradius DSB in the Brazilian port of Suape have caused serious social problems and environmental damage. Both ENDS is helping the local people to obtain justice.

'Suape' means 'crooked paths' in the indigenous Tupi language, after the streams and rivers around the port area meandering their way to the sea. The coastal strip comprises mangrove forests, dotted with white sandy beaches. The coral reef that lies just offshore is a favourite spot for diving and snorkelling. A considerable part of the expansive port area, in which an estimated 25,000 people live, is a formally protected Atlantic rainforest.

Besides being a natural paradise, Suape is a growing centre of trade and commerce. With its strategic location on the eastern point of Brazil's coast, the port is an important pillar of the economy of the state of Pernambuco. However, rather than development and prosperity, the port mainly brings the local people violence, poverty and environmental damage.

In 2011 and 2012, Dutch dredging company Van Oord acquired two contracts in Suape: to dredge the entrance to a new shipyard to be built in the port, and to further deepen access to the port from the sea to allow the largest oil tankers to reach a newly built oil refinery. For these projects, Van Oord took out export credit insurance with Atradius DSB, the Dutch state's export credit agency.

Both companies and credit insurers must adhere to internationally agreed social and environmental rules when implementing projects. Within the Organisation for Economic Co-operation and Development (OECD), Atradius DSB made agreements, together with other export credit agencies, known as the 'Common Approaches for Officially Supported Export Credits'. In addition, internationally operating companies like Van Oord – and Atradius DSB itself – have to observe the OECD Guidelines for Multinational Enterprises. Atradius DSB demands that its clients comply with the OECD Guidelines and has also drawn up its own criteria for international corporate social responsibility (ICSR), with which companies or projects have to comply to be eligible for export credit insurance.

Both ENDS has been monitoring Atradius DSB for a number of years to determine whether the activities it insures on behalf of the Dutch government are conducted according to the rules and are not harmful to people or the environment. In 2012, Both ENDS conducted a study of the situation in Suape. The study showed that activities carried out by Van Oord for the local port authority were having a dramatic impact and that the local situation had not been adequately taken into account in the decision-making on these dredging projects. By nevertheless providing export credit insurance, Atradius DSB had fallen short on its duty of care.

To deepen access to the port, the seabed was blown up with explosives. In addition, according to local fishermen, dredging waste was dumped in ecologically irresponsible sites. That not only destroyed the coral, but depleted fish stocks, by as much as 80-90% according to local sources. Traditional communities that have for many generations made a living from fishing, collecting crabs and shellfish, and cultivating fruit trees have seen their sources of income decline rapidly. In the port area, mangrove forests have been replaced by docks. This has disrupted the local water system to such an extent that people increasingly suffer from floods, while surface water has become unusable due to contamination and sedimentation.

Armed security personnel employed by the port authorities are intimidating local residents. They force people to leave their homes and land under threat of violence. These people have to find somewhere else to live, without receiving any significant compensation. They often move to remote and infertile areas, where they can hardly make a living, if at all. They also run the risk of having to move again because they have no legal right at all to their meagre replacement accommodation.

The militia regularly destroys the property of local fishermen, and people who have been driven from their homes are denied access to abandoned farmland. The last resident of the island of Tatuoca, which lies immediately adjacent to the basin dredged out by Van Oord for the shipyard, was forcefully driven out of his home in April 2016 by the Suape private militia. His house and the simple restaurant he ran were immediately bulldozed to the ground, forcing the man to give up his livelihood.

Local residents and civil society organisations have united in the 'Forum Suape'. Both ENDS works closely with the Forum, helping with capacity building and fundraising. The Forum coaches and trains the residents of the Suape port area, so that they can participate in discussions on more socially and environmentally friendly developments in the region. The Forum also monitors the violence and brings it to public attention in the media. Together with the Forum, Both ENDS informed Atradius DSB, Van Oord and Dutch politicians about the abuses, but these first initial attempts did not lead to them entering into the desired dialogue with local stakeholders.

Complaint against Van Oord and Atradius DSB submitted to NCP

In September 2014, Both ENDS, SOMO and Forum Suape organised a seminar to explore the options, together with local civil society and residents' organisations, for making use of official complaints procedures to address the harmful social and environmental effects of the dredging activities in Suape.

Both ENDS will certainly continue to monitor Atradius DSB closely to ensure it complies with this ruling, and continues to support the Forum Suape in further developments surrounding the complaint submitted to the Brazilian NCP. In the meantime, we are encouraging a dialogue in Suape between Van Oord and local fishermen and their representative organisations. 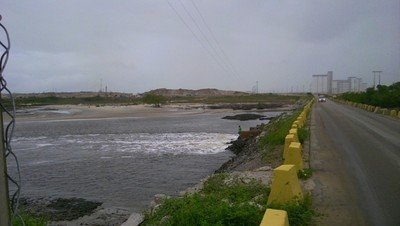