Financing of land restoration with respect for local land rights

A week ago, the twelfth ‘Conference of the Parties’ (COP12) of the United Nations Convention to Combat Desertification (UNCCD) took off in Ankara, Turkey. This convention originated from the Rio Conventions of 1992 and specifically focuses on desertification and land degradation. Karin van Boxtel of Both ENDS was there, and today, together with several other organizations that also attended the conference, she launches a document with recommendations for policymakers about the financing of the so-called ‘Land Degradation Neutrality’-concept, one of the many topics that fueled the discussions during the convention. So what is it, and why is it so important?

What is ‘Land Degradation Neutrality’?

“In short, the concept focuses on the idea that the number of natural resources and the quality of the soil should remain stable or even increase, in order to support ecosystems and increase food security worldwide. To achieve this, financing should be made available. The so-called ‘LDN Foundation’ has therefore been set up via the UNCCD. It mainly consists of private means and stimulates commercial investments in land restoration. In essence, it appears to be a good idea, but there are some things to be said against it!”

Why are the current proposals for financing LDN being criticized?

“According to us – the NGOs that endorse the document – the current plans to finance ‘Land Degradation Neutrality’ are too heavily focused on land restoration, and do not take the importance of sustainable land governance in the long term into account. What’s more, is that the financing system for ‘Land Degradation Neutrality’ should consider the local population – the very people of this story - as well. A company could very well take away land from the local people to restore land, or to build a fence around it, with the aim of compensating land degradation and erosion that have been caused by activities in an entirely different area. But this is not what this concept was intended for! This is why we have made recommendations about how we think this can be done in a better way.”

What is a better way to do this?

“One of the most important recommendations is that the financing of this mechanism should remain a true public affair. It is the responsibility of governments and public organizations, as it serves the public interest. While investors should prioritize the interests of people and ecosystems, commercial interests in fact hinder this. Only then the mechanism can operate in an independent, transparent and sustainable manner, and guarantee that local land use rights are respected.”

Whom do you hope to reach with this document?

“We truly hope that the UNCCD Secretariat and those that have set up the LDN Foundation will apply our recommendations for the financing of LDN. As such, we hope that the plans will be adjusted accordingly, and that civil society organizations that have been accredited by the UNCCD will be more involved in the LDN Foundation’s further process and in the financing of LDN in general.”

For more information, go to: 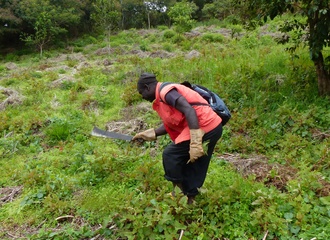