Since the nineties, the production of red bush tea in South Africa has grown enormously: over 4500 people now live off of tea production. Red bush can only be grown in South Africa because of its unique ecosystem. The entire world market for red bush tea depends on South Africa. However, climate change causes increasing heat and drought which endangers red bush production. The Environmental Monitoring Group (EMG) from Cape Town - a Both ENDS partner - supports farmers who aim to develop sustainable production techniques.

Drought
Though attempts have been made to cultivate red bush in other areas, the oligotrophic soil of South Africa appears to be the only place on earth where this is actually possible. Wet winters, dry, hot summers and specific micro-organisms that only exist here, make South Africa the ideal environment for red bush tea. However, the winters are becoming dryer and the rain is increasingly falling in short heavy showers that destroy the young plants and hardly reach the soil underneath. The pressure on farmers is increasing as well: we're getting more and more acquainted with the healthy benefits of red bush tea, so worldwide demand is increasing explosively.

Adjusting
The South African Rooibos Council is combining all its effort to create a more sustainable industry. They are supported by the Dutch government and several NGO's. EMG is researching, in cooperation with scientists and local producers, ways to adjust to the changing climate. They recently discovered that wild red bush is much more resilient to drought than cultivated red bush.  One of the results of the cooperation between EMG and small scale red bush producers is the 'Heiveld Cooperative', a cooperation that, besides producing red bush sustainably and biologically, increases social and economic stability for farmers. 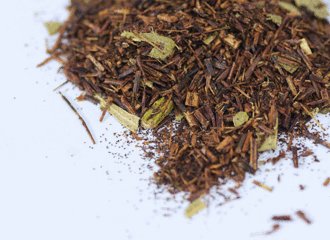