Cassia Co-op: a bridge between cinnamon farmers in Indonesia and consumers

"We are open about prices to farmers. We have nothing to be ashamed of," says Patrick Barthelemy, founder of Cassia Co-op. By removing middlemen from the supply chain, the Dutch-Indonesian company is able to pay more to small-scale cinnamon farmers in Kerinci, Sumatra. With the help of the Communities for Change Alliance between Cordaid and Both ENDS, Cassia Co-op promotes sustainable agriculture and self-organisation of farmers.

Voucher
On top of the market price, farmers affiliated with Cassia Co-op are given a direct bonus of 500 rupiah and a voucher that they can cash in after the sale to the customer three to four months later. The farmers receive 3% of the final sales price. "In that way they benefit from the added value from our processing, shipping and marketing," Barthelemy explains during his presentation at Both ENDS on January 17. "Our farmers know the export price. That is unique. "Cinnamon farmers affiliated with Cassia Co-op have a say in the organisation, which is not the case in most other export companies. There is also a training center where farmers are informed about the market and the quality standards that have to be met. "It's a simple and practical system, which involves direct contact with the farmers. This creates an emotional relationship." Furthermore, this makes it possible for the company to guarantee the origin and quality of its products and to ensure that the money actually reaches the farmers.

100% Concept
With support of Both ENDS and Cordaid, a participatory value chain analysis was carried out to hear from the farmers whether the system benefits them. Cassia treas, where cinnamon comes from, are not native to Indonesia, but have been brought over from China a long time ago. At the moment, about 85% of cinnamon comes from Indonesia. The climate is favorable. However, the trees can be harvested only after ten years. Therefore, besides forest management, diversification and rotation of crops is important. In the end, the entire tree can be put to use. "We call it the 100% Cassia Concept," Barthelemy says. Alongside cinnamon, coming from the bark, the tree can also made into paper pulp, fire and construction wood, and essential oils.

Certification
The method of Cassia Co-op is good for the farmers and the environment. Organic cinnamon from Cassia Co-op is certified by the Rainforest Alliance, among others. That is commercially attractive. Barthelemy: "Certification opens doors to customers and makes it financially interesting." To get a better market position, it is important for the company to grow. "We are trying to get the wood of the Cassia tree certified for export purposes," Barthelemy enthusiastically tells. "Of course we also want to increase the number of participating cinnamon farmers significantly."

Self-organisation
But expansion is not possible without organising farmers, he emphasises. "Then it is not longer possible to directly monitor the quality and certification requirements." Organising the farmers, however, has proved to be problematic. "There is little experience with (self-)organisation and the farmers do not always see the use of it," Barthelemy explains. From the Cordaid /Both ENDS alliance, a program is funded for the improvement of land use and organisation skills. "We are in the process of setting up and strengthening self-organisations of cinnamon farmers and make use of (network) organisations in the region for capacity building and to implement the principle on a larger scale," Remi Kempers of Both ENDS says. According to Barthelemy, the model of Cassia Co-op also be employed to market other products in other parts of the world: "It's a universal principle." 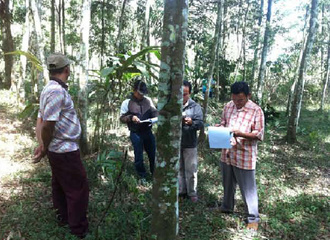