The experiences of indigenous leaders in the Philippines

The International Institute of Social Studies, Both ENDS, IUCN National Committee of the Netherlands and Mama Cash invite you for presentations by Joan Carling, indigenous leader and women's rights activist from the Philippines and member of the permanent commission on indigenous peoples of the UN, and Jan van de Venis, Human Rights Lawyer at JustLaw, about the experiences of indigenous leaders in the Philippines, in a world of increasing oppression and human right violations against environmental activists.

Indigenous peoples worldwide are involved in the protection of their living environment that often includes the intrusion of international mining companies. This has led to widespread human rights offences and violence against environmental activists.

There is now concern about indigenous leaders in the Philippines that have been earmarked as terrorist suspects by a government that is known for its pro-active campaign on drugs dealing where many suspected dealers have been killed.

Joan Carling is one of the activists whose name is on the list. She is a former expert member of the Permanent Forum on Indigenous Issues of the UN (UNPFII). Despite the many statements of concern from the UN, EU, many countries, and INGOs, the branding of environmental activists as terrorists has not yet been revoked.

After the presentation by Joan Carling and Jan van de Venis there will be an opportunity to share, exchange information and concerns, and discuss what we can do in the Netherlands and the EU, with drinks in the ISS bar until 18.00 or longer if you want.

We hope to see you on the 8th! 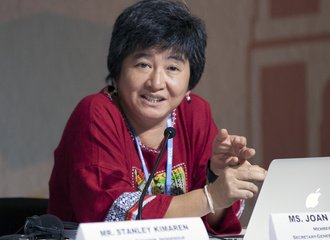 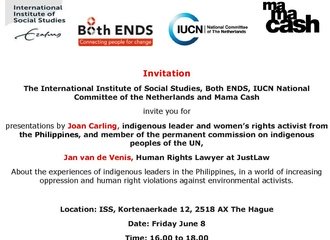