Home
>
What's new
>
Blogs
>
Feminism in Latin America: rituals, solidarity and the link with the environment

Feminism in Latin America: rituals, solidarity and the link with the environment

At the end of November EFLAC, the most important gathering of feminists from throughout Latin America and the Caribbean, took place in a park just outside Montevideo, Uruguay. Within Both ENDS, I coordinate the GAGGA programme, in which we promote cooperation between the environmental and women's movements. Our partners Mama Cash and FCAM persuaded me that this meeting was the perfect opportunity to find out whether and, if so, in which way women are interested in the environment. They had prepared me for a very intensive meeting, at which the whole spectrum of emotions would be aroused and expressed. I had no idea what to expect and set off with a completely open mind. And so it came that I spent four days among more than 2,000 women from across the continent.

What I noticed immediately was the diversity. A wonderful mix of women, indigenous, coloured and white, lesbian, transgender and hetero, disabled and non-disabled, young and old. There were expressive, bright colours everywhere: multicoloured hair and clothing, and shirts with texts and symbols, were the rule rather than the exception.

The link between environmental activism and feminism

Many of the issues that concern women seem to have nothing to do with the environment, but nothing is further from the truth. Legalising abortion, combatting sexual violence, threats against women and the murder of women, prove to have more to do with environmental problems than you would think at first glance. And yet, this was the first time that 'cuerpo y territorio' (body and land) had been on the agenda at EFLAC.

What was interesting was that there were so many women who fight to preserve the environment who have never thought of themselves as feminists, and ardent feminists who discovered for the first time that they are also environmental activists because they fight for access to land, clean water and healthy food. For them, all these issues are part of the same package. 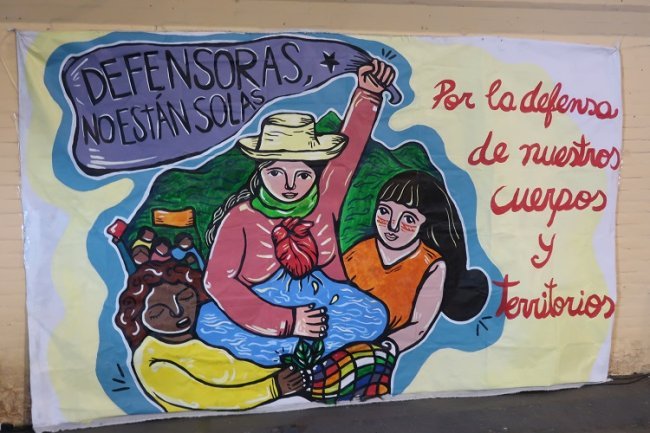 "For the defense of our bodies and territory"

The sessions on environmental and women's rights were therefore well attended, especially by women – many of them indigenous – who fight against mining and large-scale agricultural and infrastructure projects. It is the women who feel the consequences of these activities first. A lack of food and clean water means serious problems for their families, for which the women are responsible. That is why women are the first to defend their communities and are found at the front of demonstrations, because the police or the army are less likely to use violence against them. But when it comes to negotiating, it is only men sitting around the table.

In the meantime, the situation in many Latin American countries is rapidly deteriorating. Critical organisations are unable to do their work, demonstrations are banned, and protest is branded as 'terrorism'. Violence against women, intimidation, disappearances, and murder of women are on the increase. At the meeting, much attention was consequently paid to female human rights defenders (Defensoras) and how they can better protect themselves.

Despite all this, it is unimaginable how strong and militant these women are. Take, for example, the woman from Guatemala who is fighting water pollution by large-scale agriculture. Since a few years ago, her community has been surrounded by sugarcane and palm oil plantations. The river is polluted, their access to clean water has been blocked, and their land taken way from them. And all without the community being consulted.

This Guatemalan woman who fights for her rights is not welcomed with open arms. Not by the large producers, who are often supported by the government and the army, but also not by her husband or a large part of her own community. She is intimidated and threatened, has had to go into hiding on several occasions, and is completely dependent on a social network of people who take her in and protect her. If she were to be raped and become pregnant, which is no exception, an abortion would be illegal.

Sometimes, the resistance from their own community is more difficult to deal with than the anonymous intimidation. Women are supposed to care for their families and should not express their opinions in public. One of the women from Bolivia told us that her own husband cut her traditional skirt short so that she could not attend public meetings.

In this context, it is so important that women work together. Collectively, they are stronger: the environmental and the feminist movements, urban en rural, young and adult, indigenous, coloured and/or lesbian.

And don't forget the men. The few men who were at EFLAC were there to run the barbecue or take care of the technical facilities. At the end of a meeting with GAGGA partners, one of the women said that it was important to see how we could also involve men. That sounds familiar to me. In the environmental movement, we often wonder at the end of a project "How can we incorporate gender here?" 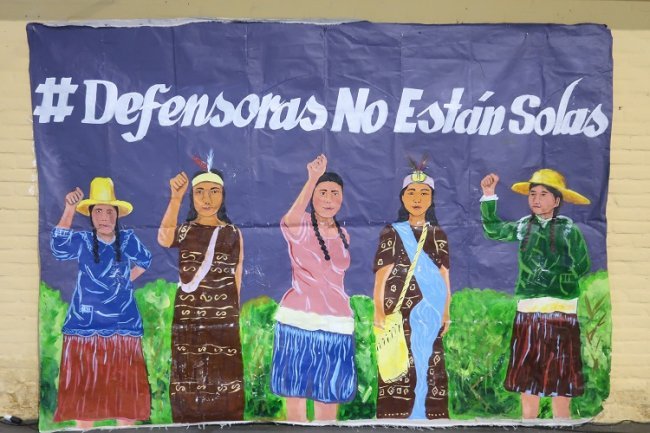 Although the discussions were serious and really in-depth, not an hour passed without attention being devoted to rituals, singing, dancing, drumming, etc. Meetings often started with a ritual. One, for example, started with photographs of different positions of resistance, which we all had to copy. That was followed by examples of slogans called out during demonstrations and marches in various countries. Everyone could contribute and we joined in enthusiastically. It was a little strange for me, but for most women it was the order of the day and was an excellent way of getting rid of tensions. Their power was clearly visible during these rituals.

I became convinced of the importance of meetings like this. It is an opportunity for thousands of women to feel that they are not alone in their seemingly hopeless struggle against power, capitalism, neoliberalism and machismo. It is also a place where they can be themselves and feel safe for a while. To talk about what they have been going through to others who understand, have had similar experiences themselves and are interested in their stories, without being threatened or discriminated against. To be able to laugh, cry, scream and sing. To be free for a while.

I learned a lot and had much to think about, but I have come to the conclusion that, with GAGGA, we are going in the right direction. Helping to strengthen local women, who are fighting for a clean environment. Working with women to develop proposals that are based on their own needs and knowledge. Entering into alliances between the environmental and women's movements and making women's hard struggle visible. It was moving listening to these women's stories at first hand, but it also made me proud of the work we do.