Soy from the Netherlands!

Recently Both ENDS and agricultural and horticultural cooperative Agrifirm organised a field visit for members of the Dutch Soy Coalition. The group visited  two farmers in the province of Drenthe who have been participating in the first practice test to grow Soy in Netherlands. One of them is an organic poultry farmer and the other a conventional dairy farmer. Both use soy in animal feed on the farm. Tamara Mohr of Both ENDS was there and explains about this initiative.

Associated problems with South American soy
"Cattle feed largely consists of soy which is mainly produced in South America. Large-scale export-oriented production of soy is causing enormous problems in these countries like deforestation, land grabbing, pollution, poor working conditions and so on. We think that the solution is to be found in a combination of responsible production, replacement and reduction of soy cultivation. Why shouldn’t we try to simply produce soy in the Netherlands as well? Of course this should be done in a sustainable way: that would be a great start."

The Netherlands as an alternative

"Even though it will take years before Dutch soy becomes  a serious alternative to South American soy, it is promising that in any case attempts are being made: no guts, no glory. Soybean cultivation in the Netherlands currently covers only a few hectares and its yield is primarily used in food consumption, not for livestock.  In the Netherlands there is a growing demand for soy which has not been genetically modified. This non-GM soy is getting increasingly scarce and expensive in South America,, which created opportunities for selling Dutch soy in the Netherlands.”

The first step is the hardest

"The farmers we visited were very excited, but also pointed out that there are big challenges that have to be dealt with in areas such as the cultivation, processing and sale  of locally grown soy. At the same time they are confident that soy cultivation in the Netherlands will become easier and more profitable in the future.  They are very proud to participate in an experiment that ultimately, if it proves successful, could have an enormous positive impact.”

Do you want to know more about soy? 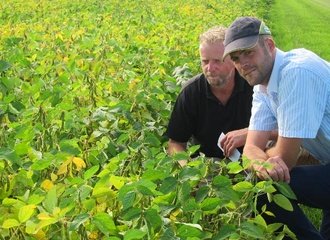