Earlier this month, the seven men found guilty of the murder of Berta Cáceres were sentenced to jail for periods between 30 and 50 years. The court confirmed its opinion that Berta Cáceres was murdered for her role in defending the rights of the indigenous Lenca communities.

Two of the convicts are former employees of DESA, the electricity company that built the Agua Zarca dam that Cáceres fought against. Sergio Rodriguez and Douglas Bustillo have both been sentenced for 30 and a half years for participating in the planning of the murder.

In Honduras, the judgment is welcomed by the Cáceres family and by COPINH, the organization in which she was active. At the same time, concerns are expressed about the prosecution of all those responsible for the murder of Berta. The trial of David Castillo, charged as intellectual author of the murder and general manager of DESA, is facing serious delays and is accompanied by defamation campaigns against COPINH's work. In the lawsuit against the seven perpetrators, evidence was presented that refers to other suspects, but these suspected intellectual authors are not prosecuted. COPINH, Berta Cáceres' relatives and various Honduran and international organizations, including Both ENDS, continue to call on the Honduran state and the international community to investigate the other suspects.

The process in Honduras confirms that employees of the former client of the Dutch development bank FMO, the company DESA, are involved in the murder of Berta Cáceres. FMO was one of the financiers of the controversial Agua Zarca dam. Both ENDS closely follows the legal processes in Honduras and the Netherlands concerning this case and cooperates with indigenous groups in Honduras that stand up for the rights of the communities. 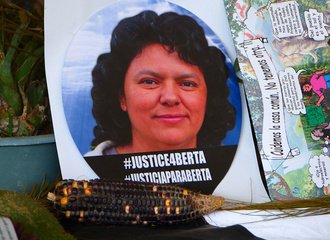