In the Netherlands I sometimes feel a lack of protest, a shared standing for beliefs and against injustice. For instance the anti-nuclear energy gathering last month only attracted a few thousand protesters and shamefully I must admit I wasn't one of them. Maybe that is because Dutch prosperity suffers little under the financial and debt crisis, which is hitting many Greek low and middle incomes in the face.

Of course it is unnecessary to say the many countries in the global south are and have been suffering under the yoke of debt for many many years. Maybe now that the debt issue has breached the outer borders of Europe and is slowly encroaching on France and even the UK, we can start caring.

One of the mayor points which came out of the conference was that also the debt crisis is a crisis of over-consumption. If we want to restore a balance in our financial systems, we will have to accept that we have reached our peak-wealth.

Is it true that we need a disaster that touches us personally before we start to care and take action? I certainly hope not! Maybe we can take a lesson from the Greeks after all: stand up and protest a little more against systems which our planet cannot support. 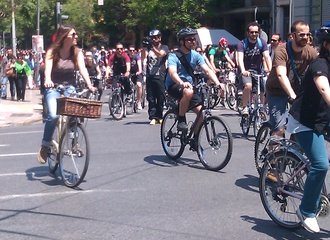