Shutter the lives of the affected communities

Shutter the lives of the affected communities

The loss of the usually fertile riverine soils land and rich biodiversity vegetation combined with changes in climate have made their present lives even worse, wishing they had known what was about to befall them before they lost their livelihoods by giving their fertile rich soils land for the dam.

Having been thrown away from the river, unable to easily access water and wood from the rich riverine vegetation and rich soils, women are now struggling to be able to cultivate and produce enough to feed their families from the poor, stony, erosion prone hillsides plots of land they received in place of their down the river Nile rich soils. They use so much energy and so much time and need much land of those poor soils to produce so little - not enough to support their families.

They walk long distances and take more time with many resulting social and health problems to get water home. Less rain and long droughts mean that they have to look for water most of the time in the year. Maintaining their hygiene is becoming difficult.

They also walk long distances and take a lot more time to the only "nearby'' Mabira forest (5km) to get fire wood to cook their food. Fewer meals are now cooked and easy to cook but less nutritive value foods are preferred due to lack of energy to cook the would be nutritive foods. "Given chance to go back to my former land, I would go running. I would rather live in my earlier grass thatched house than live in this brick house with a lot of suffering I am now going through" say Christine Nabwire one of the Naminya resettled community.

Women and girl children in the affected communities of Naminya resettlement, Malindi, Buloba and Kikubamutwe, have while on these long distances through thick and isolated sugarcane plantations to get firewood, experienced untold suffering. They have been raped, young girl children defiled, some times beaten if they resist and their firewood confiscated by the forest rangers or bad elements a long the long way between them and the forest.

Consequently they have suffered STDs in this era of HIV/AIDS, produced fatherless children, girl children dropping out of school due to pregnancies of rape and defilement and forced to become mother children (children mothering children.)

The Bujagali dam forcing them to poor stony easily eroded hillside soils, together with the prevailing harsh climate change conditions (less rain and long droughts) have only aggravated their conditions from bad to worse - an opposite of what they were told and promised by the Bujagali dam promoters. For sure, this is not the development to be - the dam claims to bring to the people.

Worse still, they don't see a ray of hope ahead. The electricity they were promised since 8 years now, the piped water among others never seem to come their way and climate changes are becoming worse each day that passes.

To these peoples life will never be the same again, it's lost and their livelihoods crushed. The search for energy should not come at this cost.


Posted by Both ENDS:

In addition to this article, please watch this artistic movie that tells the story of a local who lives on one of the beautiful islands in the Nile. This man is forced to leave his home, because of the constructions of the Bujagali dam in Uganda. A documentary from Baobabconnections: 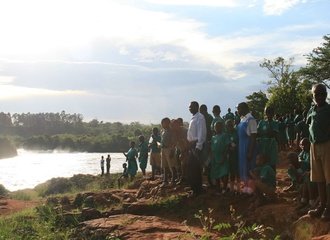