Pernambuco, is in the extreme northeast of Brazil, is one of the country's poorest regions. One of the most important projects aimed at stimulating development in the state is the expansion of the deep-sea port of Suape, complete with an oil refinery and shipyards. The port covers an enormous area; at 13,500 hectares it is bigger than all the different sites of the port of Rotterdam together. Unfortunately, the port lies in the middle of an exceptional and vulnerable ecosystem of mangrove forests and Atlantic rainforest, which are under serious threat from the expansion. Furthermore, the livelihoods of the approximately 25,000 people living in the area are at risk. Most of these people are so called 'traditional communities' of artisanal fisher folk including a number of Quilombola communities whose inhabitants are descended from enslaved people who have lived in this lands for hundreds of years. The communities' fishing catch is visibly declining as a consequence of industrial pollution, the most serious case of which was the oil spill that badly affected the whole coast of Northeast Brazil at the end of last year.

The COVID-19 crisis is striking these people especially hard. As in other parts of the country, the local health system is extremely fragile. The national government denies the severity of the pandemic while hundreds, or even thousands, of people die every day. Given that the resilience of local communities had already been seriously eroded by the impact of the port expansion, complete chaos now reigns in the poor areas around Suape. Many people have no access to clean water and in villages and slums there is an imminent danger of food shortages.

COVID-19 does not affect everyone equally

As everywhere else in the world, the crisis around Suape does not affect everyone equally. Here too, one can see the effects of structural racism; the poor, black communities in particular have been left to their fate and face disproportional impacts. And the crisis has exposed another inequality: women, who have traditionally dominated the shellfish market in the fishing communities, have lost their sources of income through pollution and shrinking access to the sea. Through the general crisis caused by the port expansion, they are also more frequently the victims of domestic and other forms of violence. It has therefore become even more e difficult for them to fulfil the role of main caretakers of their families, a role that is still generally expected of them.

In response to the port expansion, residents have formed support groups to strengthen their voices and to defend their rights. These groups – often formed and led by black women – currently fulfil another important function: with only limited financial resources available, they still manage to distribute emergency aid and buy food for the worst affected households. They are supported in these efforts by the Fórum Suape Espaço Socioambiental. The Forum is a platform of community- and women's' organisations with whom Both ENDS has been working since 2013. Besides providing emergency aid, the Fórum together with other local organisations has started a campaign to give residents access to information on COVID-19, who to prevent getting it and to teach them to make their own disinfectants.

However, while the residents' groups are desperately trying to find solutions to this acute crisis, the port company of Suape simply pushes ahead with its own plans. As there is much less attention to violations of the rights of the local population due to the COVID-19 emergency, the port's armed private security services clearly feel that they can do as they please. Physical violence and intimidation against community members are daily occurrences. The dialogue between the residents and the port company, which is essential for the future of the communities in this area, has now almost ground to a complete halt. The COVID crisis is therefore putting the local people in a double disadvantage: while the destruction of the land they live and work on continues unabated, the small space for dialogue they had laboriously created to prevent this destruction happening, is disappearing rapidly.

The curse of poor areas in less poor countries

The case of Suape shows the harsh reality of the poorest and most marginalised people, and especially those whose livelihoods are being eroded because they live in areas where large investments are made in the name of 'development'.
In these areas especially there is little funding available to fight poverty, while here often the need is the greatest. The communities around Suape have to survive basically without government support or funding from traditional aid organisations. Organisations like Fórum Suape Espaço Socioambiental are therefore essential and but are in urgent need for more funding. There is also a need for more international attention for forgotten areas like this. It appears that during this crisis human rights violations and the destruction of the environment in the name of development and modernisation, are more than ever the order of the day. 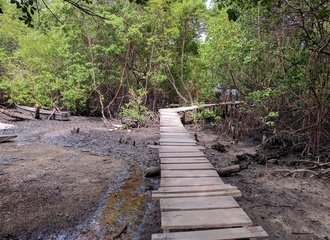