The World Bank is a development bank... for whom?

It's October, time for the annual meeting of the World Bank in Washington DC in which the annual results and future plans will be presented to the outside world. It also gives NGOs from all over the world an oppotunity to talk with World Bank’s administrators and relevant staff on future policies. Pieter Jansen of Both ENDS travelled to Washington together with three representatives of local organisations in the South: Yu Chen of Green Watershed from China, Mayra Tenjo of ILSA from Colombia and Ram Wangkheirakpam of NEPA from India. Their main purpose is to highlight the importance of social- and environmental requirements that the investments of the World Bank should meet, the so-called 'safeguards'.

Outdated policies of the World Bank

The main topic of discussion for the Bank is the new strategy it’s proposing to help the 40% poorest people of the world with its projects. According to the Bank, this can be achieved by investing in large projects such as hydrodams, to generate the energy needed for economic growth. As the policy makers of the Bank believe that economic growth is the best way to eradicate poverty in this world, its policies focus on large-scale infrastructure. To be able to compete with financers from countries like China, the Bank argues its safeguards should not be too strong.

To learn from mistakes

According to Pieter the Bank has not learned much from the fact that its policies have not had the intended results. “Its policies did not change much over the last decade, while many NGOs state that they have not contributed to poverty reduction at all. To the contrary, they have actually caused more inequality and poverty! We keep telling the Bank’s management and board over and over again that economic growth is not the miraculous solution to combat poverty.”

"This time, I will not visit Washington on my own. I will be accompanied by people who themselves are harmed by the World Bank’s projects in their own regions and who will share their experiences. Ram, Mayra, Yu and I will mainly talk about the revision of the World Bank’s safeguards. We will meet the directors of the Bank and we will give two presentations: one on the forestry policies of the Bank and the related rules. Another presentation will be about the Bank’s safeguards which we think should become stronger instead of weaker.

“We illustrate our presentations with practical examples. Ram will tell about the impact of a project in Manipur, North East India. The World Bank attempts to introduce cash crops to some of the indigenous communities in this region. According to Ram and many others it is not at all favorable for the local communities to be drawn into the monetary system in the way that the World Bank would like to see it. It will cause even more inequality, disrupt local social relationships within the local communities and it will hamper the decision-making processes in the villages. Yu will point out to the World Bank that the social and environmental criteria of Chinese financers should not serve as an example for those of the World Banks. The Bank tends to take Chinese investments as an argument to weaken its own safeguards. 'If they don’t comply, why should we?'"

"Mayra will express her worries about the land rights of smallholder farmers which are threatened by the implementation of climate projects. On the one hand reforestation projects do benefit the environment (absorbing extra CO2), but on the other hand these projects hardly take into account the situation of local communities living in these areas. The Word Bank should think hard about how to use funds intended for climate projects. Using it for 'reforestation projects' in countries like Colombia is certainly not the way. These are not forests: they are enormous swaths of land covered with many trees of the same kind. This is extreme monoculture, and the wood will eventually be sold while local people do not share in the benefits. To the contrary: this 'reforestation' causes smallholder farmers to lose their farmlands and their livelihoods."

"I am pleased that Both ENDS was able to bring together these people and get them in touch with people from the World Bank. This way they could illustrate with their own examples that the Bank’s current path is not reducing poverty. The existing safeguards should promote sustainable development rather than disrupt communities and cause further environmental damage.”

Short video: Margarita Flores of ILSA on safeguards of the World Bank 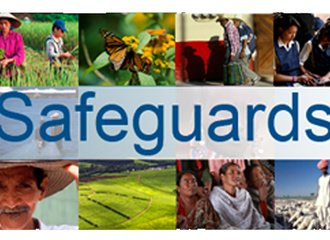