Playing in the coal fields

By Annelieke Douma
Playing in the coal fields 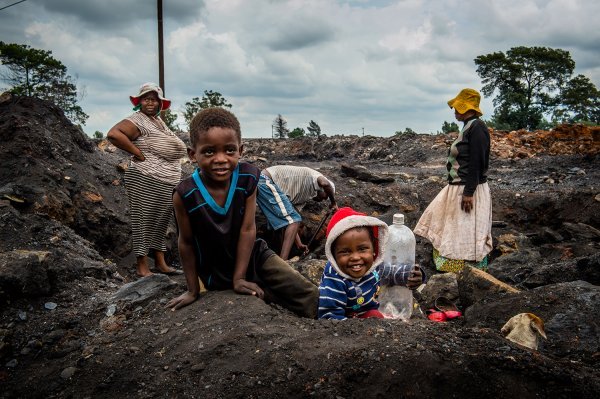 Air pollution worse than in Beijing

We are in Mpumalanga, the centre of the coal industry in South Africa. The reason for our visit is that together with local organisations, we have started a project to support local women by using human rights. The entire region is rich in valuable minerals such as gold and platinum, but it is most famous because it produces 83% of the 225 tons of coal that South-Africa uses and exports each year. Where the local population used to make a living from agriculture in the past, national and international companies are now digging up coal. Many of the people that lived here were displaced without any warning, receiving no or very little compensation. Both the soil and the groundwater are now seriously polluted by chemicals released and used by the mining company and the air pollution is worse than in Beijing. The people live in shacks, are unable to grow crops in the contaminated soil around the coal mine and struggle with serious lung diseases.

Not even a job in the mine

Even the expected new employment, which was promised to many poor villagers, has not been realised. The new mining jobs were given to migrants from Zimbabwe or Mozambique, who are cheaper labourers. Some men now work illegally in mines that have been abandoned. This is life-threatening work since there is no supervision and there are no clear safety procedures. Meanwhile, the unemployment and desperation have led to conflicts and drug- and alcohol abuse. 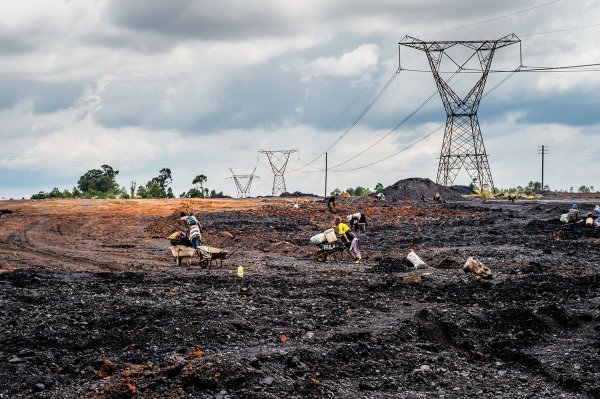 Women are hit even harder than men. A women has little voice in local decision making processes or negotiations regarding compensation, but she does carry the burden of caring for her family and faces increasing difficulties in providing them with water, food and fuel to cook with. Furthermore, besides taking care of her children, she now also needs to care for those family members who suffer from health problems due to the chemicals and contaminated water. The mining industry flourishes at the expense of these women, who are left with additional burdens and tasks. Many women are forced to engage in prostitution as it’s the only way to earn any income. Aside from the significant psychological trauma and health risks, many women are often victims of sexual violence. For instance, the truck drivers who bring the monthly supply of drinking water on which the whole community depends, often demand sexual favours from the women in return.

“Isn’t the local government doing anything?” asks Philip Kilonzo from ActionAid Kenya. Unfortunately, the answer is obvious. The government is corrupt and benefits from the profits that companies make. In practice the laws concerned with the human right to clean drinking water, food and a healthy environment mean very little. In our project we research how women can claim these internationally and nationally recognised laws and we support local human rights activists and women groups in raising their voice. 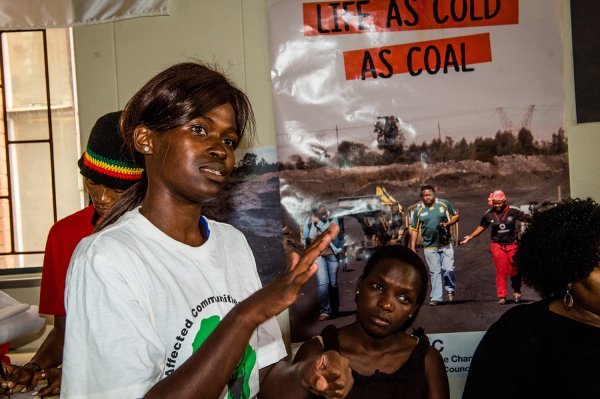 And that is what they do: in these harsh conditions we see how courageous people dedicate themselves to provide change around them. We meet Zethu Hlatshwayo from Kathula Workers who set up small vegetable gardens and protect natural resources to show people that there are ways to make a living other than working for the mining company, other ways that aren’t as devastating for people’s health and the environment. Matthews Hlabane from the South African Green Revolutionary Council helps people directly. He recently obtained an identity card for Emma, in order for her to apply for social subsidies. His organisation also tests the local water quality so that companies and governments can be held accountable for regulating the rises in pH levels in the water.

We also meet the strong women that have united together to form WAMUA: Women Affected by Mining in Action. They tell us about the large water and land deficits. About unemployment. “Qualifications don’t help you, your body is your CV”, says Lorraine Thabisa Kakaza of WAMUA. They listen to each other and write each other’s stories down. They demonstrate at and against the mine, they write petitions and involve the media as much as possible. “We continue until we are heard” emphasises Lorraine. Because, as Milka from project partner Forest People Programme says: “Just like a mother that can ignore her crying baby for some time, she will eventually pick up her child and feed it”.

And of course we and our project partners will continue to support them, to help their stories to be told and heard and to gain attention on an international level for their situation. To ensure that the human right to water, food and a clean environment is not only the virtual ‘paper tiger’, but becomes a reality for the people that need it the most. So that children can study and go to school and shape their own futures. Because a black coal field is not a playground.